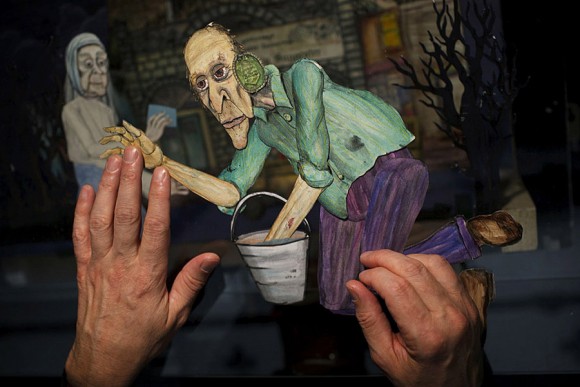 TREBON: The 4th edition of Anifilm, which concludes on 8 May 2013, firmly established the festival’s presence amid a reviving animation industry in Central Europe.

Some 21,000 spectators and 200 international guests flooded the South Bohemian spa town for a programme that both honoured the history of animation and embraced the realities of the industry today.

The ten-film competition line-up, divided equally between adult and children’s animated feature films, included just one film that might qualify as a box office hit, the popular Czech children’s film Goat Story 2 (www.aaa-studio.cz) . The winner of the competition of adult films was U.S. director Chris Sullivan’s Consuming Spirits, a 15-year labour of love dystopian story that combines animation techniques. The children’s film winner was a French-Belgian coproduction, The Day of the Crows directed by Jean-Christophe Dessaint.

Among the festival guests was legendary animation director Gene Deitch, appearing as part of a retrospective of the influential U.S. animation studio UPA. The 88-year-old Deitch departed the festival early, after his wife Zdenka was taken ill. The festival also looked at the roots of Czech animation with screening of its earliest animated films, and 60-year retrospective of Zagreb Film.

The industry from Central Europe and beyond turned out for the first Visegrad Animation Forum (VAF). The event, co-funded by the festival and the Visegrad Fund a modest 40,000 EUR, was organized by the young Association of Czech Animation. The VAF presented its own awards in a short film competition, won by the Polish film Ziegenort directed by Tomasz Popakul. A pitching forum of TV projects was won by Slovak director Katerina Kerekesova’s imaginative spider family puppet project, The Websters produced by Fool Moon. Slovakia also took home the Czech TV Award of 2,000 EUR for the pitch of the short animated film Nina & Ondro directed by Veronika Obertova and Michaela Copikova for Artichoke and Poland’s Colab Pictures.

“This is the time for Central Europe to come together to develop its own initiative,” VAF organizer Michal Prochazka told FNE. “This is essential to survive in a time of budget cuts.” He added, “The main gain is the spirit of the Forum. The most important thing is that people from our region can get together.” The Czech association ASAF is acting as a model for animators in neighbouring countries, with a similar association founded in Slovakia, and one upcoming in Poland.

With Anifilm, it seems the animation forum has found a home that shares its spirit. Just four years ago, Anifilm had its funding pulled out when the festival’s previous organizers decided to move the event to another town. The town of Trebon and the South Bohemia region worked with festival organizers to keep the festival going under a new name (Anifilm) and management, and on a non-existent budget, relying on friends and allies to keep it alive. This year’s festival, under the young team of producer Tomas Rychecky, festival director Aida Abbasova, and programme director Bara Prikaska, stretched their budget to 8 m CZK, winning support from the Czech Ministries of Culture, Finance, and Foreign Affairs. By expanding its programme to include the industry section, the festival also brought in the dynamic director and team of Czech TV, along with animation industry representatives from across Central Europe and beyond. The challenge for the festival as it continues to grow will be accommodating the audiences and professionals who will be making annual pilgrimages to Anifilm.