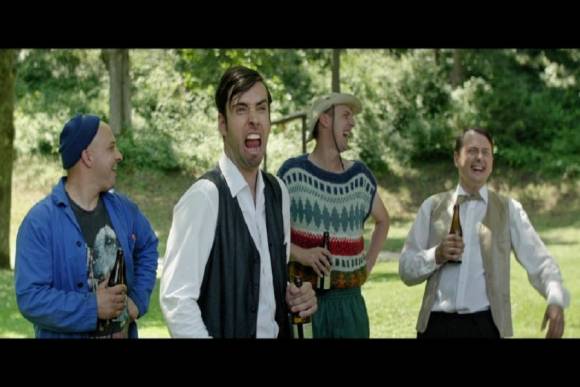 At Hostar by Luka Marčetić

LJUBLJANA: Slovenian comedy At Hostar / Pr’ Hostar by Luka Marčetić has topped 210,000 admissions, becoming the most viewed domestic title since Slovenia claimed its independence in 1991.

The ultra-low budget film is a spin-off from a Slovenian online YouTube indie TV series that became a local sensation four years ago.  The videos had over a million viewers which prompted the team to make a film based on the same concept about some crazy guys from idyllic countryside of the Gorenjska region and a small hotel known as Hostar Inn.

The film was released in Slovenian Cinemas in October 2016 and after 40 weeks it still dominates the domestic box office with 210,769 admissions and over 1.1 m EUR gross.

“It’s wonderful that our first feature film became the most viewed in Slovenian film history! I am very happy for all the people who enjoyed and laughed watching it, and I also hope that the ones who didn’t believe in our project and didn’t support it are now having doubts. We don’t have future plans, but we are not in a hurry. The others are making plans for us,” producer Goran Hrvaćanin told FNE.

Meanwhile producers Goran Hrvaćanin and Dejan Krupić have established Zavod Ajkule, a company for the production of films, video films and TV shows.

At Hostar was produced by Kerlc Film in coproduction by Iridum Film, and tells the story of the employees of a small hotel who try to sabotage its sale to an international buyer.