Celebrate the 15th anniversary of Ex Oriente Film with DAFilms.com 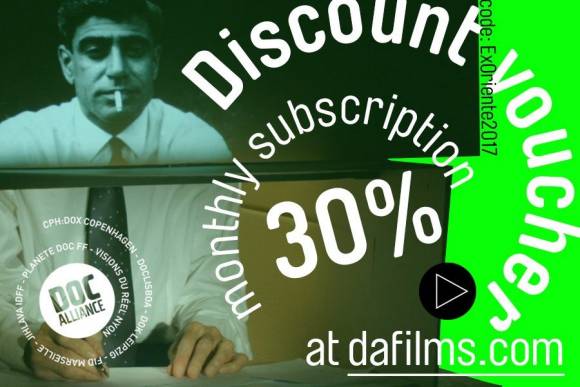 In the fifteen years of its existence, more than 160 documentary projects from Eastern and Central Europe went through the workshop, including award-winning films at key international festivals, such as Brothers, The Domino Effect, Blind Loves, At the Edge of Russia, Rabbit a la Berlin, Village Without Women and Bakhmaro.
During the Ex Oriente Film workshop 12 selected director-producer teams have the opportunity to meet with renowned professionals, award-winning directors and producers, and gain experience, feedback, contacts, and other forms of support for their projects. During the past 15 years Ex Oriente Film has hosted a number of prominent tutors such as Viktor Kossakovsky, Mike Bonanno of the Yes Men, Peter Mettler, Gordon Quinn, Kirsten Johnson, Mads Brügger and many more.

In collaboration with the documentary VOD portal DAFilms.com, we have prepared a selection of films supported by the Ex Oriente Film workshop throughout its 15 years of existence. For 2 weeks until May 14th, you can stream a selection of critically acclaimed documentaries, including the Oscar nominee Rabbit á la Berlin, Blind Loves or Bakhmaro.

For the fans of Institute of Documentary Film, the portal offers a discount voucher for monthly subscription, which can be used until June 1st (code: ExOriente2017). If an individual wants to watch one only of the films in the Ex Oriente Film showcase, they can share the profile of the film on Facebook and then stream it for free (only once).

As a special bonus the film Blind Loves by Juraj Lehotský is available free for streaming without a subscription.