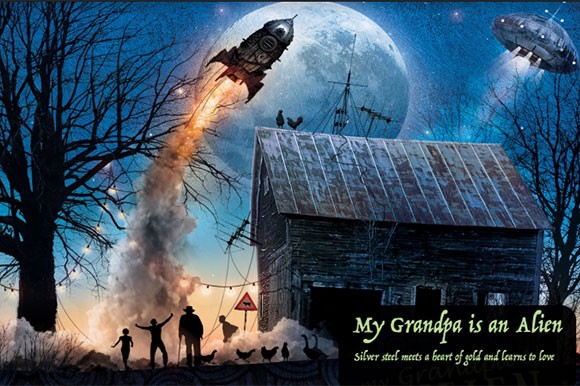 ZAGREB: The children's film My Grandpa is an Alien by Drazen Zarkovic and Marina Andree Skop is currently in preparation with the shooting set for 2017. The film is a Croatian/Czech/Bosnian coproduction.

Una is a 9-year-old girl, who is finding it hard to make friends. She is ignored by her two brothers and her only friend is Grandpa. One evening, Una witnesses the extraordinary abduction of Grandpa by aliens. Trying to solve the disappearance, Una discovers a secret basement compartment full of alien objects, but her attention is grabbed by a grumpy little alien robot, that tells her that Grandpa is an alien, whose spaceship accidentally crashed on Earth 30 years ago.

Pavlica Bajsic, Branko Ruzic and Irena Krcelic wrote the script. The DoP and cast are not yet decided. Moj dida je pao s Marsa / My Grandpa is an Alien is produced by Croatia’s Studio Dim in coproduction with Master Film from the Czech Republic and Fabrika from Bosnia and Herzegovina.

Shooting is set for summer 2017. The film is supposed to be finished and to have its premiere in 2018. 2iFilm will distribute it domestically.

Studio Dim
This email address is being protected from spambots. You need JavaScript enabled to view it.
www.dim.hr

Master Film
http://masterfilm.cz/
Tomáš Michálek: This email address is being protected from spambots. You need JavaScript enabled to view it.

Fabrika
http://www.fabrika.com/
This email address is being protected from spambots. You need JavaScript enabled to view it.