Camerimage Festival Center to Be Built in Toruń Featured 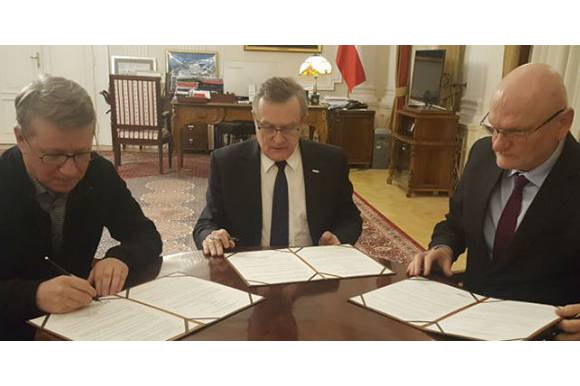 TORUŃ: The Camerimage International Film Festival will move from Bydgoszcz to Toruń by 2022, as a special Camerimage Festival Congress Center will be built to serve as a permanent location for the Camerimage IFF, as well as a stand-alone cultural institution funded by the Ministry of Culture.

In December 2017, Piotr Gliński - the Minister of Culture and National Heritage, Michał Zalewski - President of the City of Toruń and Marek Żydowicz - president of the Tumult Foundation and organiser of the Camerimage IFF, signed a letter of intention about the creation of a special Camerimage Festival Congress Center in Toruń.

In 2010 the festival was moved from Łódź to Bydgoszcz, following a conflict between the city and the Tumult Foundation. "I've always said the festival will take place where the conditions are most suitable. We've been waiting for an international festival center that would suit the level of our event and allow us to further develop Camerimage", Marek Żydowicz told FNE.

The President of Toruń declared that the city will become the main investor in the center and will ensure the reservation of 7,000 square meters of land near the Jordanki Park, in the center of Toruń. The total budget of the investment has not yet been announced. Marek Żydowicz and the Tumult Foundation will bring in a ready architectural project, previously created for Camerimage Łódź Center.

"The next four upcoming editions of Camerimage will take place in Bydgoszcz; this doesn't change our acting agreement with this city", Żydowicz also said.