FNE at Transatlantyk 2018: Q&A Polish Producer Kamil Przełęcki Talks About How to Get a Project Financed in Poland Featured 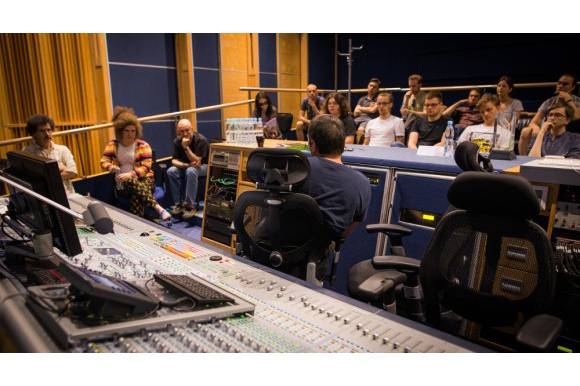 LÓDŹ: Polish producer Kamil Przełęcki talked exclusively to FNE about the financial realities of film production and distribution in Poland during the 2nd edition of Lodolamacz / Icebreaker, an industry event hosted by the Transatlantyk Festival 2018 in Łódź from 15 to 17 July 2019.

Film and TV producer, production manager, most recognised for his work with Andrzej Wajda on several of his films including Katyń (Akson Studio) and Revenge (Arka Film), Kamil Przełęcki led a workshop at the Lodolamacz / Icebreaker, an industry event devoted to development and distribution issues with special focus on getting proper financing for any project.

Lodołamacz is organised with the support of Creative Europe Desk Polska, the Polish Producers Alliance, the Łódź Film Commission and the Polish Film Institute.

FNE: Why matching funding to the project is crucial in film production?

Kamil Przełęcki: Today we met to talk about getting financing in a wise way, a way that would match the sources of funding with the main goal behind the film. Film productions are made with several goals in mind: to make a profit, to create a work of art, to educate or even to promote a product.

Depending on what the goal is, it is important for a producer to know which money to use in order to avoid disappointments. It is not always the money that comes back to the investors; sometimes their gain is the prestige, numerous film awards and audience awareness of their company or brand. It is a very important skill for a producer to match the goal and the potential of the film to the funds available to him.

FNE: Do Polish producers have these skills and know how to use them?

Kamil Przełęcki: I am very happy to see that especially younger generations are focused and don't have any fear of reaching for European funds. The distance to European coproducers is much shorter for them, this is a huge advantage that they have over the generations that came before 1989. But I still see that private capital is the pain of our market.

Most of the producers have a very hard time in clearly explaining what will be the effect that their film will have and what the investor stands to gain from it. Polish producers need to learn how to communicate with them on a business level, how to talk about the rate of return, the time in which this return will take place, the percentage rate and the value of the money invested.

FNE: Did any of the Polish producers manage to have success with private capital?

Kamil Przełęcki: We have numerous productions like that, for example TVN's franchise Letters to Santa. These films are not major budget productions, but they gather a big audience and can bring enough income to even finance the next installment of the series. The same with Patryk Vega, who makes his films only with private capital and doesn't need any public funding.

We also have successful films that join business and an artistic goal, like Gods (Watchout Studio) directed by Łukasz Palkowski or Art of Love (Watchout Studio) directed by Maria Sadowska. There are also other high quality, awarded projects that can bring an audience that could finance them in entity, provided that they don't have an enormous budget capped at 4-5 m PLN.

FNE: What qualities does a Polish producer need in order to be a good coproduction partner?

Kamil Przełęcki: They need to be professional. We can't bring fantastic investments to the table, apart from what we can get as a minority coproducer from the Polish Film Institute, but any foreign coproducer will find a capable partner in Poland, able to lead them through the realities of our market. It is crucial when it comes to getting shooting permits organising the film crew, communicating with them.

FNE: We are on the break of introducing some sort of a tax incentives in Poland. How will this change the market?

Kamil Przełęcki: We don’t know how impactful they will be on the market, as there is a colossal difference in tax incentives for international producers and coproductions with Poland versus any film made in Poland, even by a Polish producer. If everyone can get this financing, this would mean another major source of funding.

But will it lead us to positioning Poland as a good film service location? Because the goal is to bring major Hollywood productions to Poland, so when a producer needs locations in our region and we are competing with the Czech Republic and Slovakia, any tax cuts would be very helpful.

FNE: What are your upcoming production plans?

Kamil Przełęcki: The direction is to work with young, original directors whom I had a chance to teach film production. I find that the best way to nurture talent is to find them during the last years of film education. Currently I have three of such debut projects in development, all will probably pan out in a year or two. I am also working on a feature that is based in Lódż, but that is all I can say for now.