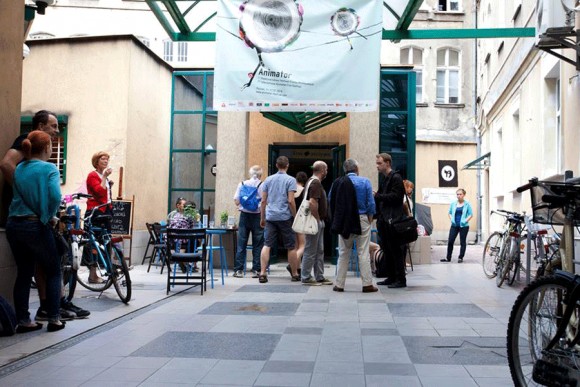 This month we speak to Małgorzata Kuzdra, the manager of Kino Muza in Poznan, Poland. Opened in December 1908, Kino Muza is one of the oldest cinemas in the world and has been located in the same building in central Poznan for 107 years. Kino Muza was voted favorite cinema in town by the people of Poznan during a poll organized by the local newspaper Polska The Times Glos Wielkopolskiin 2011.

Małgorzata Kuzdra: Actually, the biggest challenge we face each day is that there are so many movie premieres, interesting events and new ideas, and we have only one 160-seat screening room. In order to have a rich, diverse and original art-house repertoire we have to make very difficult programme choices and sometimes we have tough negotiations with distributors. The challenge is to keep the programming at the level we have established.

M.K.: Our motto is “We know what we play” which means that we are faithful to the art-house programme strategy and a film or event gets on the screen by decision, not by accident.

Our programme is a combinations of films awarded in the main European and Polish film festivals, films made by authors we respect, films which deal with important social topics, films which offer our audience good fun without insulting their intellect and, last but not least, films we believe are good, original, brave, touching and important.

M.K.: We do host a lot of those. We like when our programme is dynamic, our cinema-goers like to participate in festivals (Animator, Transatlantyk), events like Q&A with directors, workshops for children, live cinema and film weeks (Spanish, German, Russian, etc). We are also well-known in the city for our film foucses and that is what defines us.
All those events show the diversity of our programme and transform cinema from a screening room to a cultural spot where it’s worth being.

M.K.: We are members of Europa Cinemas and that gives us annual financial support.

Europa Cinemas creates many possibilities for us to get inspiration from the work of other cinemas. Conferences and trainings are a great occasion to develop the skills of our cinema crew, share experiences and learn from each other. They also help us to renew our motivation for work and to share our passion for films, and they give us motivation for further cooperation.
Finally, it is good to be able to find understanding from people who are facing similar difficulties, even if they are from different parts of the world.

M.K.: We could divide the local community around Kino Muza into two groups: Maria and Bogdan Kalinowscy known in Poland as The Cinefiles of Poznan, and the rest of the moviegoers.
Within the second, larger group, our influence is the usual: we prepare a good repertoire and interesting events, we are open to hear from our audience, we offer special ticket promotions so the most interested people can come to watch movies more often.
Maria and Bogdan Kalinowscy are a nationally famous elderly couple, they get invited to the film festivals and get free entry to all cinemas in Poznan. Why? Because from 1959 until 2015 they have seen 13,549 films, all in cinemas. Three years ago they lost their apartment and got a new one, right above Muza! We helped them as much as we could, raising money for renovation (the apartment was in really bad condition), and now they are our neighbours and we are proud of them.

M.K.: We believe it makes sense to work with very young children in order to familiarise them with moving images and help them discover how rich and diverse the world of cinema is.
We hope that the first cinema experience they have in a small, traditional theatre is valuable. We invite 3 year old children for weekend screenings with parents, and children from kindergartens and schools during the week. Approximately 2,000 pupils take part in our film education programme (New Horizons of Film Education) each month. We believe they will be our regular audience in 20 years, well-prepared for an art-house repertoire…

M.K.: We’ve already made the big step into digital cinema and it was, of course, exciting. Now, two years later, it seems so natural. The main change is that many film premiers were not available for us before, when the distributor wasn’t able to provide us with a copy of the movie.

Now it has become easier. I think this motivates the cinemas working in the same area to contact each other and exchange information, because better access to prints could result in a situation where we are all playing the same titles. That would be a pity and it would waste the potential of the film market without good communication between us.
We enjoy the 4K screening but we still keep on board our 40-year-old 35 mm projectors and we are happy to use them from time to time. We plan to show both of them to people during the Museum's Longest Night Event on 16 May.