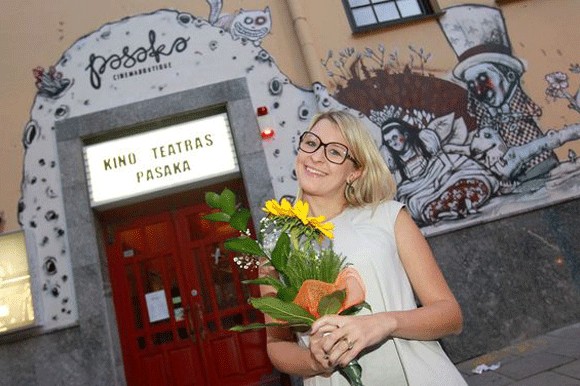 This month we speak to Greta Akcijonaite, the co-owner and manager of distribution and programming at Kino Pasaka, a company which distributes films and also has an art house cinema in Vilnius. Kino Pasaka was founded in 2009 as a distribution company and an art house movie theater in the old town of Vilnius, Lithuania. It is the only private art house cinema in Lithuania which offers two screens and also distributes films in Lithuania and the Baltic states.

The company has distributed 25 titles so far including: Ida, White Shadow, Elles, Habemus papam, Les bien-aimés, Yo, también, Pranzo di ferragosto, and Soul Kitchen. Pasaka hosts all the main film festivals and events in Vilnius and it is also active in educational activities. During summer the cinema relocates for open-air screenings. The company is a member of Europa Distribution, Europa Cinemas, CICAE and EDEN networks.

Greta Akcijonaite: Selected by hand and heart. That’s our slogan which drives us in our daily work as well as in decision-making. It’s both our joy and our curse. Because the number of films released by other independent distributors finally satisfies our needs as a cinema, we now only acquire several titles per year and get involved in projects that are really interesting to us.

For example, we have just released White Shadow with Tide experiment and it was a great experience: we loved the film, organized discussions throughout the country, established partnership with music clubs and had a joint film/music event. It was also a first attempt to release a fiction feature day-and-date release in Lithuania. So even if it doesn’t sound very new in Europe, in Lithuania we do some innovative stuff.

The flip side is that the films we love usually have limited audiences and don’t bring profit, so it’s almost impossible to survive without support.

FNE: Are there any challenges implied by these innovations?

G. A.: The main challenge is that it’s very personal. Distribution is my personal hobby and when I went on maternity leave, the releases stopped. Now I have to start the engine again. We lost distribution support and it’s a challenge to get back to where we were.

G. A.: As a small country, we can boast a great number of well attended film festivals: Vilnius Film Festival, Scanorama, Vilnius Documentary Film Festival, Human Rights Film Festival, Vilnius Film Shorts, Film Festival for Children and Youth. All of them are eager to cooperate with distributors. Besides the festivals, pre-premiers and special programming is offered to audiences in our own project Cinema Under the Stars, an open-air screening venue from June to August.

G. A.: It depends upon the title. We've experienced different scenarios, like when we picked up a film after its success in a festival, released it after a few pre-screenings in festivals or held it back intentionally without any screenings in a festival. Normally, a good release for us means about 2,500 admissions. A festival can add some to this number, but it also can exhaust the potential of the film. If I can be sure that the title becomes “a star” of the festival and have limited amount of screenings, I would go for it.

G. A.: Piracy affects not only our non-existing VOD/DVD market but also cinema going. Even art house films are being downloaded illegally. Birdman is being released on 10 April 2015 and most of my acquaintances have already seen it. I think first of all that the state has to establish a legal strategy for piracy prevention and secondly we each have to make an individual effort.

G. A.: Ida. We released it with zero budget at the end of October 2014 and still have five-six screenings per week, which means it’s on screen for 22 weeks and still working. The final numbers are not big, but we make sure a film has a long life and will build decent numbers in the long run.