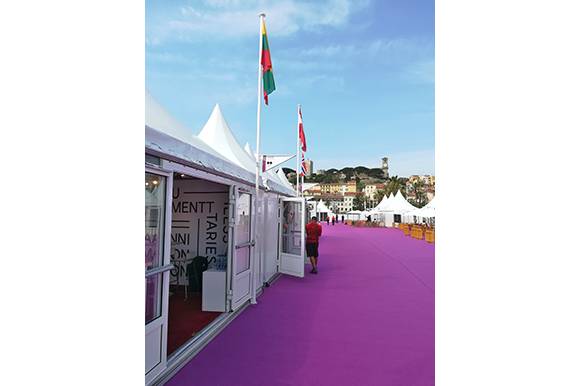 About 50 representatives of the Lithuanian film industry will take part at the market and across the programme set up for industry professionals. Producer Lukas Trimonis was selected for the networking platform Producers on the Move, the special programme Vilnius Goes to Cannes will feature the film Isaac by the filmmaker Jurgis Matulevičius while the country’s pavilion will promote Lithuanian films and raise awareness about the Lithuanian film tax incentive

which has already brought over €8.5m of investments into film production in Lithuania during the past few years.

“Each visit at the Cannes shows that we don’t really need to explain where we come from or how we work anymore”, Dovilė Butnoriūtė, the head of the Lithuanian pavilion and the head of Department of Film Promotion, Information and Heritage at the Lithuanian Film Centre, says. “Lithuania has fortified its position on the global film industry map as a regional hub of professionals. Festival programmers show interest in the films currently in production and in Lithuania as a partner country offering exciting and diverse content through retrospectives and special programmes. This year we will focus on special events to strengthen industry ties between Lithuania and the Baltic states, Poland, Croatia, and Georgia, and to promote co-production. We get a lot of attention and honoured guests, so we can only hope that the coming days bring new projects and good results.”

Lukas Trimonis will represent Lithuania in the programme Producers on the Move. Despite huge competition he was selected for the networking platform as one of the 20 most promising, up-and-coming European producers. For almost two decades the programme of the European Film Promotion has been aiming to promote long-term cooperation between the European countries in the film industry, while the participants are selected according to their co-production experience and premieres beyond their native countries. Four other Lithuanian producers have also taken part in the programme – Dagnė Vildžiūnaitė in 2016, Živilė Gallego in 2015, Donatas Žvalionis in 2012, and Ieva Norvilienė in 2006.

The great news is that the Miracle – which had its world premiere at the Toronto International Film Festival in 2017 being the first Lithuanian film at the festival in the past 17 years and was launched on a successful tour around international festivals – will be presented to the French public at large tomorrow. From May 9, the Miracle distributed by Urban Distribution will reach the cinemas across France.

Yet another Lithuanian name will be mentioned at the Cannes Film Festival when presenting  The Short Films and Cinéfondation Jury – the Lithuanian filmmaker Alantė Kavaitė will rate the short films in competition and the productions selected for the Cinéfondation programme dedicated to the works from a variety of film schools. Kavaitė’s film The Summer of Sangaile gained international critical acclaim three years ago. It was awarded for the best directing at the leading American independent film festival Sundance and screened in the Berlin International Film Festival’s Panorama section as well as at the Marché du Film.

Lithuanian filmmakers should be noted for their contribution to the feature film Donbass by the famous Ukrainian director Sergei Loznitsa, which was selected as the opening film of the programme Un Certain Regard at the Cannes this year. Just as in Loznitsa’s A Gentle Creature which was screened in the main competition programme last year, Danielius Kokanauskis was once again entrusted with editing the film, while the Lithuania-based Vladimir Golovnitski took care of sound.

The Short Film Corner at the Cannes will feature Gabrielė Urbonaitė’s latest work The Last Day of School. The previous work of this young generation filmmaker titled Back was also selected for the programme in 2016.

The first Lithuanian-Georgian co-production Namme directed by Zaza Khalvashi will have a special screening at the Cannes film market. This presentation has been arranged by the sales agent Alpha Violet. The world premiere of Namme took place in the competition programme of the Tokyo International Film Festival in the autumn of 2017. The European premiere took place at the Tallinn Black Nights Film Festival.

The Cannes Film Festival will also host the first meeting of the European film festival network Moving Images – Open Borders initiated this year. The Lithuania-based European Film Forum Scanorama is one of the seven founding members of the network, which will foster the artistic value and regional peculiarities of European film, and mentor new European filmmakers and talents.

The presentation of the Lithuanian film industry at the Cannes film market is sponsored by the Lithuanian Film Centre. This huge global film industry event is visited by over 12,000 professionals each year including 4,000 producers, over 3,000 buyers and distributors, as well as 1,000 festival programmers.

In 1941, a Lithuanian activist, Andrius Gluosnis, kills a Jewish man named Isaac in the infamous Lietūkis Garage Massacre. Years after the act, Gluosnis is haunted by guilt.

Ali’s family has inherited a mission: taking care of a local healing water spring and treating sick villagers. His three sons are sceptical, only his young daughter Namme stays faithful to the family’s tradition springing from the village’s mixed Muslim and Christian heritage.
Namme meets Merab. Closeness and sympathy is developing between them. As construction of a water power plant begins nearby, the healing spring starts to dry up. Ali remembers an old legend that only a sacrifice can bring water back…

On his last day of school, Edgaras goes on an illegal cigarette run to Belarus in order to afford a better life with his girlfriend.