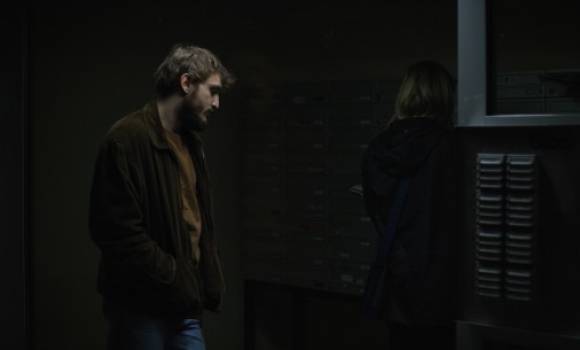 BERLIN:German director Angela Schanelec’s Berlin Golden Bear contender I Was At Home But/ Ich war zuhause, aber is a small scale domestic drama about a middle-class family in crisis.  The Berlinale main competition slot will bring more followers to this director whose previous films have already done the rounds of the festival circuit. But a German female director in the main competition in the Berlinale is already a reason to focus attention on a film that is sure to divide critics and audiences between those who will consider it pretentious and those who are ready to see a more profound meaning behind its basic storyline.

The film is a German, Serbian coproduction about a widowed mother Astrid played by Maren Eggert whose young son Phillip played by Jakob Lassalle runs away from home and lives in the wild for a week returning mysteriously without any explanation.

When the 13-year-old Phillip continues to refuse to say anything about where he has been Astrid and Phillip’s teachers at school think the unexplained disappearance must be related to the recent loss of his father.  Astrid begins to ask herself questions about her middle-class life and values and her career.  Things reach a crisis when Phillip is admitted to hospital with blood poisoning leaving Astrid is a nervous wreck, ridden with guilt and hounded with feelings of failure as a mother. Astrid is still grieving for her husband two years after his death leaving her emotionally drained and unable to connect or share her grief with her children.  Phillip’s younger sister Flo played by Clara Moeller tries to connect with her brother but feels cut off from her mother. The family seems to be falling apart.

While the story may be simple Schanelec’s approach to telling it is anything but.  The story has long stretches of scenes without dialogue and a very large part of the film centres around rehearsals of a school production of Shakespeare’s Hamlet with Phillip cast as Hamlet. Much of the dialogue is lifted from Hamlet and we should grasp something significant and profound running through the story from all this not doubt although viewers will struggle to understand exactly what that is and how it relates to the struggle the family is going through and this heavy reliance on this device is sure to be one of the things that divides audiences about whether the film’s striving for layers of meaning spills over into pretentiousness.

Other non-linear devices also serve to make the highly stylised storyline mysterious and opaque. The simple purchase of a used bicycle by Astrid becomes a whole subplot and possibly a metaphor for how she seems unable to cope with life. One of the film’s greatest assets is its leading actress Maren Eggert who surely deserves some sort of prize for her portrayal of Astrid.  One of the longest and most interesting dialogues in the film is when Astrid runs into Serbian filmmaker Dane Komljen by chance and he proceeds to give a long unasked for intellectual critique of his work.

While the film is often overly heavy in its self-imposed profundity there are nonetheless glimpses of humour that lighten it from time to time and give it more viewer appeal.  The complex nature of the film means it is probably necessary to view it more than once to absorb all it has to offer although in today’s crowded media environment that may be too great an investment to ask.

I Was At Home But/ Ich war zuhause, aber (Germany, Serbia)