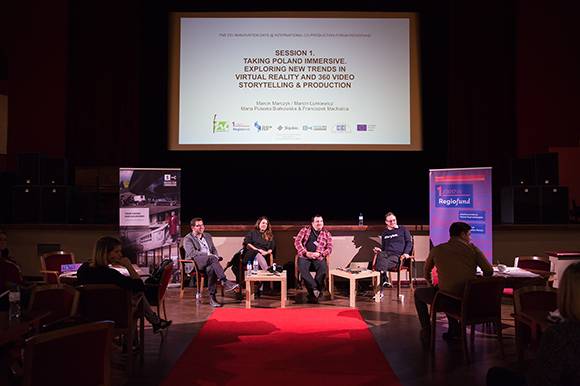 The two-day innovation-driven event consisted of discussions, practical case studies and one-on-one networking meetings between international audiovisual industry leaders and experts, professionals from the CEI region as well as film-sector attendees of the international coproduction forum with the goal of exploring new trends in the European audiovisual business landscape, discovering opportunities offered by new technologies such as virtual and artificial reality and 360 degree video.  There was also a chance to learn how to unlock venture capital, access public financing learn about new film financing opportunities in the region.  The event was set up to develop and foster business connections between the stakeholders and participants for innovative activities in the future. 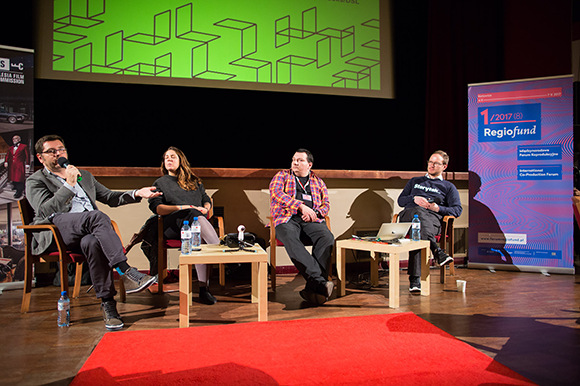 Marcin Łunkiewicz, producer and 360 video expert from Zielony Pomidor Studios, Poland, and virtual reality content development studio Mimoo, presented the case study of the first 360 degree video series in Poland by discussing the challenges and opportunities for storytelling and production set by the fresh and innovative format. “Using VR goggles the viewer can see everything and feel like he/she is inside the story, so technology is creating a new cinematic language”, Marcin Łunkiewicz said.

Maria Pułaska-Białkowska, producer, HRZ3D Studios, Poland, said the main difficulty that the industry is facing is the lack of appreciation of high quality of 3D animation and post production as well as the complexity and high cost of the work involved. Yet she was positive noting that both 3D animation and virtual reality can open new markets such as visualisation for real estate and architectural sectors.

The second session of the day, “How to Make a Million? Case study of Slovenian web series and national blockbuster At Hostar”, explored the success of the Slovenian surprise blockbuster At Hostar (Kerlc Film), originally a Youtube driven comedy sketch format that was developed into a feature film receiving high acclaim from local audiences. As of 2017 At Hostar is the highest grossing domestic production in Slovenia’s history and a prime example of the potential to attract new audiences through digital engagement. “We just wanted to make a movie, because we like doing it”, Goran Hrvačanin summarised.

The third session, Film Financing and Co-Production in Ukraine featured acclaimed Ukrainian producer Andrey Yermak, whose recent film, the Ukrainian/Slovak coproduction The Line directed by Peter Bebjak, is the Slovak submission for the Foreign Language Oscar. Yermak provided an overview of recent developments in the Ukrainian film landscape, especially regarding international collaboration and coproductions noting that the Ukranian Film Fund now has more than 20m EUR annually to support the national film industry.

The final session of the first day of the FNE CEI AV Innovation Days programme was a panel titled Where’s the money and what’s the interest? Mapping public and venture capital financing for film and co-productions. The panel included acclaimed producer Ilann Girard, Arsam International / OLFFI, France, who has been behind well received films such as March of the Penguins and Lebanon amongst others, and Ian Collins, a London based serial entrepreneur and managing partner of Radium Services (UK).

The goal of the panel was to explore the question: how to involve investments from the technology sector to the European film industry, and what are the key takeaways from startup driven entrepreneurship models that could benefit regional filmmakers and producers?

The discussions, practical case studies and workshops had the goal of presenting new trends and innovations in the digital media landscape that can cross borders and be utilised as models for innovation in regional film and audiovisual industries. Combined with industry networking opportunities the FNE Innovation Days can be evaluated as a much needed platform and opportunity for discussion on industry innovation within the CEI region.

On the second day of the event participants got down to work in one-to-one meetings with experts to be able to make a practical application of the lessons learned and network with the panel experts and well as participants of the Forum Regiofund pitching teams.