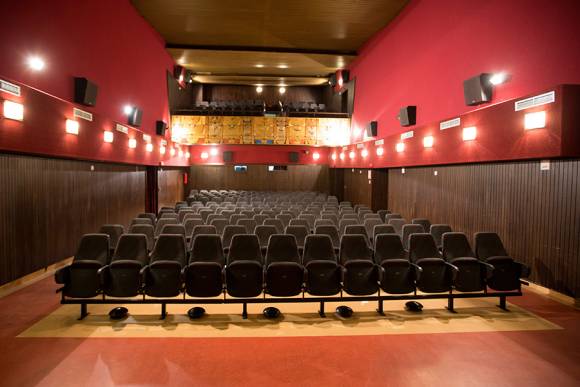 This month we speak with Snježana Kuzmanić, director and programme manager at Kino Karaman in Split, Croatia. Based on available information, Kino Karaman is the oldest movie theatre in Europe and has been in continuous operation as a cinema since its first screening.

The cinema is named after Josip Karaman, a film enthusiast, who opened the first permanent cinema theatre in the centre of Split (Grand Elektro Bioskop, later called Karaman) in 1907. In 1910, he purchased his own camera and shot several valuable historical documentaries, which are among the first domestic films in Croatia.

On 22 December 1946, a company called Kino Poduzeće (Cinema Enterprise) was established within the former Yugoslavia, aiming to host film screens for the citizens of Split. Kino Poduzeće showed films in Kino Karaman until 5 September 1994, when it was privatised and changed its name to EKRAN d.o.o. Today EKRAN d.o.o. includes two digitalised cinemas, Kino Karaman and the open-air summer cinema, Kino Bačvice.

The 230 seat Kino Karaman has been proclaimed by the Croatian Ministry of Culture as a National Cultural Heritage site. Karaman has become a cultural symbol, showcasing European, art house and documentary movies, which locals wouldn’t ordinarily see in a traditional blockbuster cinema. During the summer season, Kino Karaman temporarily closes and moves its operations to an open-air seaside summer cinema called Bačvice, which seats over 450 persons and has been enjoyed by all Spličani since 1954.

Currently, Ekran is putting together a project to renovate and modernise Kino Karaman's interior in order to improve the cinema experience for its clients.

Snježana Kuzmanić: From a business perspective, the biggest challenge we experience is to increase our attendance. To ensure this, we work hard to offer programmes which guarantee the return of our customers, especially the loyal older generation, who faithfully attend our cinemas regularly.

Enticing the youth or young adults to attend the cinema is somewhat challenging due to the convenience and preference of online video streaming, multiplexes and blockbuster movies. Traditional advertising channels also fall short as we find each of these younger audience demographics requires a tailored and focused marketing strategy. In response to this, we currently engage with younger audiences through marketing at schools, social media platforms, and working with film festivals which actively ensure the participation of young adults.

Keeping our audience plays a pivotal role in ensuring our activity. We approach this by offering services 365 days annually, and programmes that speak to all of our audience demographics. Our programmes are highly flexible and constantly changing, with six different films weekly and three varying genres daily. With this strategy, regular visitors are exposed to changing choices and tend to return.

Lastly, as we operate throughout the year, staffing continues to remain a challenge and this requires active management and planning on an ongoing basis.

Snježana Kuzmanić: We have adapted our cinema programme to be of a Boutique Style. We prefer to expose our audience to European, independent films, art house movies, documentaries, children’s animations and local films or regional films.

We are particular about our Boutique Style and work towards protecting our audience preferences and trust by gearing our selection of movies to be relatable, enjoyable, informative or of entertaining value.

We tend to avoid screening blockbuster movies, however if this type of commercial movie yields a positive response from our audiences and fits into our Boutique Style programme, then we sometimes do include it into our programme. For example, our normal attendances improve when we include the Oscar season into our programme, as our public enjoys viewing movies which have been nominated for the Oscars.

Snježana Kuzmanić: We find that independent films which tend to be shown at festivals don’t necessarily perform well with traditional cinema viewers. Because of this, festivals are a great opportunity to expose and screen niche movies that wouldn’t be ideal for our normal cinema programme. Thereby they give us the added benefit of showcasing many aspects of the movies industry, without impacting the performance of our normal screening programme. Festivals also bring audiences to our cinemas who wouldn’t normally attend, and our cinema gets associated as an organisation which supports the festival community. Ultimately we hope to convert festival visitors into regular cinema attendees.

We have actively started to organise event style screenings, with targeted themes (according to topic, genre, country etc.). For example, in 2016 we organised the Halloween Week, including a number of different horror movies. We also incorporated the theme beyond the films by decorating the cinema, providing scary face paintings and promotions. All this activity increased attendance and we received positive feedback and interest from our customers. We find that these events bring in alternative crowds, create awareness and curiosity amongst the public; most importantly it diversifies our normal programme.

Snježana Kuzmanić: Over the decades the movie industry has gone through considerable changes and is consistently evolving. During the 80s and 90s multiplex cinemas came to maturity and in the 21st century digital cinema entered the scene. Our cinemas failed to evolve and modernise with the changing times, and that ultimately impacted our performance, so we lost our audience.

Europa Cinemas has assisted us in two key areas. Firstly, financial support, which has allowed us to digitalise our cinema and to continue further operations. Secondly, Europa Cinema has provided us with a new roadmap. We have realigned our product offering, changed the type of movies we screen and the way we screen them. We have geared our cinemas to offer European films, events style screenings and promotional activities which target all audience including young audiences. As a result, we have been able to recapture an audience (which was lost) and thus continue to operate and evolve into the future.

Snježana Kuzmanić: There has never been a time in living memory when our local communities could not watch a movie in our cinema. Quite often we hear comments from our customers that two or three generations of family members have attended a movie screening at the same time. Many locals consider the cinema to be an unofficial cultural institution, linked with nostalgic memories of a time when they or they as children or their parents watched movies in our cinema.

For example, we had an event style screening with the support of the Israeli consulate, where we screened several Israeli movies. Another example was the recent screening of the documentary Trieste, Yugoslavia by Alessio Bozzer, which showed how during the 70’s and 80’s Yugoslavs travelled to Trieste in order to go shopping for western brands. We decorated the cinema with name brand jeans and handed out premium chewing gum, which was not available in Yugoslavia. This was of particular interest to our local community because this is something they experienced first-hand and is within their context. We noted many positive and even negative emotional responses to this event.

Snježana Kuzmanić: As I mentioned earlir, working to engage young audience is one of our biggest challenges and is a particular area of focus. The younger audience's approach to consuming movies has changed. Online streaming and mobile devices have made films more accessible without having to go to a physical location. We work closely with a number of local schools to bring children to our cinemas. This initiative allows children to experience movies in a traditional way, as opposed to a typical multiplex. At the same time, we try to educate this demographic about the heritage of our cinema, in addition to being exposed to the social aspect of going to watch a movie with their friends. According to their participatory feedback, we find local children’s films are well received.

Snježana Kuzmanić: The digitalisation was a complete game changer as it has given us the flexibility and freedom to be in full control of our screening programme. Prior to digitalisation we had a critical dependency on the availability of the 35mm film, turnaround delays and a limited choice of films to screen. If we had not digitalised the cinema, we would have had to shut down. Through this technology, we are empowered to change and design programmes in a short period of time, with more flexibility, choice and control, to produce a programme which our customers are looking for. As a result, this has ultimately allowed us to grow into the future.