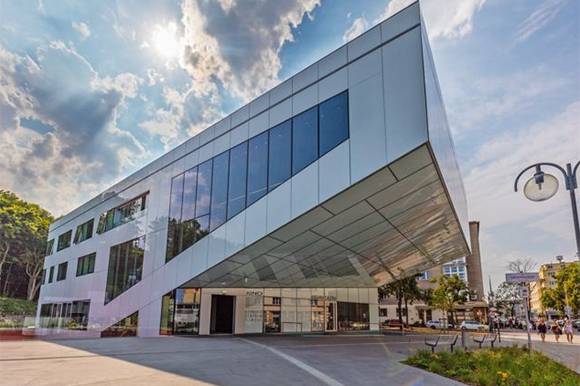 This month we speak with Leszek Kopeć, the Director of the Gdynia Film Centre, Gdynia Film School and the Polish Film Festival in Gdynia.

Built with the support of the City of Gdynia and the European Union, the centre received the Eurobuild Award 2015 in the architectural design category, the Construction of the Year award (the most prestigious prize in Polish construction industry) and it was also recognised as the Best Public Space in the Pomorskie Province.

Located in the very heart of the city, Gdynia Film Centre is operating an art house cinema, a film school, an art gallery, a bookshop, a restaurant and a café since September 2015. The centre hosts film festivals, workshops and meetings with filmmakers. Open-air screenings, concerts and other events are also held in the square and the amphitheatre neighbouring the Gdynia Film Centre.

Leszek Kopeć: We have been operating for only two years, but it is clear that challenges change over time. During the first months, it was most important to make the inhabitants of the city and the region aware that a new film and cultural centre was established in their surroundings and that they can benefit from it on a daily basis. Today we already have our faithful audience and we focus on providing them with an attractive film offer along with accompanying events.

It is worth knowing the broader context. The relation between Gdynia and cinema is very strong. Our city hosts the Polish Film Festival, which is the greatest event devoted to Polish cinema, with over 40 years’ tradition. Since 2010, due to decisions made by the Mayor of Gdynia Wojciech Szczurek and his consistent strategy for the city development through culture, the Gdynia Film School has also been operating. The school is already well known around the world as short films made by our graduates have received dozens of awards at major film festivals. Films from the Gdynia Film School have been nominated twice for the Palme d’Or at the Cannes Film Festival. The festival, however, lasts just a week, and the school targets a limited group of students and participants.

Over the past decade, a wide audience in Gdynia had poor access to artistic and quality cinema. Former cinemas operating in the city, closed down after the systemic transformations in Poland, were replaced by multiplexes. There was no alternative for the purely commercial offer.

Founding the Gdynia Film Centre we wanted to continue the city’s cinema tradition. Our three screening rooms are named after the former Gdynia cinemas. We thus referred to residents’ sentiments and created positive associations with the new facility. We had to bring it to life and show that this is a place where one can see films that are not screened in the big chains. We have made it: according to a survey carried out in spring 2016 (after a few months of its activity), the Gdynia Film Centre gained recognition of over 70% of the residents of Gdynia. We have achieved this thanks to social media and word-of-mouth marketing, and without considerable expenditure on advertising.

Our major challenge is now to offer such a repertoire, for a cinema with fewer than 400 seats, which includes as many films expected by our audience as possible. Every day, seven days a week, the programme of the Gdynia Film Centre offers a dozen different titles. Several films have their premieres every Friday. We also organise additional events: meetings with filmmakers, book promotion events, theatre performances. The three screening rooms sometimes turn out not to be enough…

Leszek Kopeć: We definitely focus on European cinema, including Polish films. From the very beginning we have been a member of the Polish Arthouse Cinemas Network, thus we are able to screen quality artistic and art house films. Thanks to the efforts and experience of Anna Morzyk, who is now the programmer of our cinema and who had successfully run the film centre in Gdańsk for many years, the repertoire of the Gdynia Film Centre offers also world cinema productions.

We listen to our audience and we can have direct contact with them through social media. That is why we know that the viewers praise our programme and appreciate the friendly atmosphere of the cinema, that has become a real alternative to mass entertainment. Most often they simply say: “A good and inexpensive cinema with no commercials and popcorn”.

Leszek Kopeć: It gives us great pleasure to screen films awarded at the Polish Film Festival in Gdynia. We noticed something as “the Festival effect”, meaning that films which have earned recognition in the festival are keenly awaited by the viewers and attended by a large audience. We also notice the growing interest in documentaries amongst our viewers. It comes from the fact that Gdynia hosts also another major film festival – the Millennium Docs against Gravity Film Festival,, devoted to non-fiction cinema.

The example of both festivals shows that this kind of events creates the viewers’ need for direct contact with cinema and filmmakers, arouses the interest in cinema and “drives” the audience. It is important to satisfy that need

wisely in-between festivals. The programme of meetings and events can be on a smaller scale but should be held regularly, periodically, thus maintaining a stable level of participants’ interest.

Leszek Kopeć: The fact that the Gdynia Film Centre was invited to join the Europa Cinemas network is very prestigious for us. We are very happy and we would like to use the opportunities in the best possible way. As a new member of the network we hope for inspiration and exchange of experiences. We are willing to extend our offer, making use of best practices and adapting them to our local needs.

Leszek Kopeć: To answer that question one should visit the Gdynia Film Centre on any working day, in the morning. What would you see? The café would be probably occupied by a group of seniors – our regular visitors. They are often people who had not gone to the cinema in the past as they did not find the offer attractive. In the centre, they participate in special screenings as well as in those included in the current repertoire. They very often come in groups as they can meet here and discuss.

At the same time you may hear children gathering in front of one of the screening rooms. They visit the cinema as part of their school classes. We promote active living among the citizens of different age groups. Apart from the access to cinema, we offer participation in workshops, exhibitions, meetings with interesting personalities. It is clear that the new place has already become part of the city’s landscape. It attracts large numbers of visitors also during summer. In good weather people can spend time in the green area next to the centre – rest on deckchairs, have a family picnic. We are always happy to take part in various campaigns and events organised in that location – e.g. the Children’s Day, the Independence Day or Santa Claus events – and help them balance their programme with our cinema offer.

Leszek Kopeć: For a year now, we have regularly organised morning screenings for children, showing them Polish animated films. We thus educate a new generation of cinema viewers and show them that it’s worth having contact with film art not only via television, computer or mobile phone. Screenings for the youngest audience are accompanied by workshops and meetings with educators.

Using the potential of the Gdynia Film School, we also organise School Film Archive Workshops for young adults. Workshops' participants may go through the entire process of making a very short film, from the concept through scriptwriting, on-set work to editing and postproduction.

Our programme also includes screenings of Polish films as part of the Gdynia Film School Club’s activity. Screenings are accompanied by meetings with filmmakers (directors, screenwriters and actors).

Along with the Against Gravity festival, the Gdynia Film Centre also organises film screenings as part of the Documentary Academy. The non-fiction films correspond to the topics of interest of the school students groups and every screening is followed by a discussion.

Leszek Kopeć: Our cinema is young, hence from the very beginning it has operated based on the latest technology. We offer high-quality video and audio, in accordance with contemporary standards and high requirements. On the other hand, we are aware of the growing interest in online film platforms, which enable access to numerous films, including the latest productions and TV series, at any place and time.

The question whether it is a serious competition for traditional cinema is an important issue today. I personally believe that direct contact with film art in the friendly atmosphere of a cinema auditorium is a one-of-a-kind experience. All the activities carried out by the Gdynia Film Centre I have talked about are intended to strengthen such a belief among our viewers.