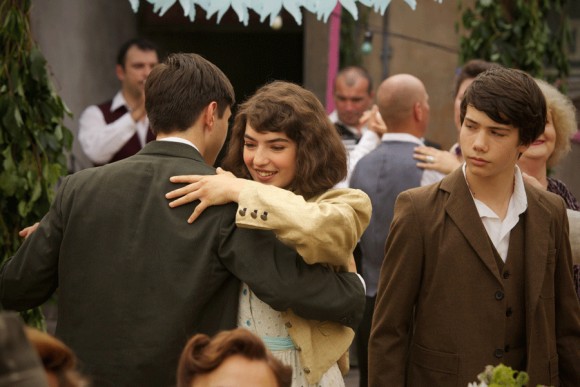 Political turmoil resulted in the resignation of the country’s cabinet in July, the appointment of a caretaker government in August and early Parliamentary elections in October. Within the year, the Ministry of Culture changed its leadership three times, while the National Film Center got a new acting director in March. Against the background of a slight increase of audience interest in national film production, especially films funded by private sources, the production of TV series dropped.

UNESCO approved Sofia as City of Film in the Creative Cities Network and the country’s main cultural institutions started to prepare for the celebration of the 100th anniversary of the Bulgarian cinema on 13 January 2015.

Compared to the previous year the total number of feature films increased. Fourteen films were produced, half of them supported by the Bulgarian National Film Center. The films of 2013 and those completed through the end of September, 2014, were screened at the Golden Rose National Feature Film Festival. After a one-year break, its 32nd edition took place 11-17 October 2014 in Varna. The festival screened 14 features in competition, eight out of competition and 24 shorts. At the same time, although the BG NFC supported five coproductions with Bulgarian minority participation in 2013, for various reasons, none of them was ready before the festival deadline.

Before that, on September 5-th 2014 Ivan Nichev’s Bulgarian-Israeli Bulgarian Rhapsody (previously Concert for the Survivals), coproduced by Bulgaria’s Cinepaz and Israel’s Cinisima became the Bulgarian nominee for the Academy awards. The story is set in 1943 when two Bulgarian teenagers fall in love with a beautiful Jewish girl who is one of the 11,682 Jews from Northern Greece and Macedonia forced by the Nazis to cross Bulgaria by train and to continue up to Vienna and the concentration camps.

For the first time since its foundation in 1961, the Golden Rose NFF established an international jury. Having attracted international attention from the very start of 2014 Maya Vitkova’s Viktoria, a story about a girl being born with no umbilical cord, produced by Bulgaria’s Viktoria Film and Romania’s Mandragora was screened “out of competition”, as the international jury president Emil Hristov, at an early stage was involved in the film as DoP.

On the other hand, the Bulgarian international hit The Lesson, directed by Kristina Grozeva and Petar Valchanov, coproduced by Bulgarian Abraxas Film and Greece’s Graal Film and produced without any Bulgarian public support, won the New Directors award of the 62nd San Sebastian International Film Festival and the Bulgarian Critics Guild award in Varna.

The deeply personal Buffer Zone by Georgi Djulgerov, the Silver Bear-winning director,considered an icon of the Bulgarian cinema, produced by Front Film particularly moved some domestic film critics. Djulgerov himself defined his 15th feature film, as “a farewell to the cinema he adored, made by directors like Bergman, Fellini, Tarkovsky and Truffaut, a cinema that does not exist anymore...”

At least eight new Bulgarian films are expected in 2015. They include Iglika Trifonova’s False Witness, coproduced by Bulgaria’s Klas Film, Dutch company Phanta Vision and Swedish company Filmlance about a Chief Prosecutor of The International Criminal Tribunal for the Former Yugoslavia, is in late postproduction. It will be the first Bulgarian film since 1989 shot outside the country (Sarajevo, Amsterdam, The Hague and Southern Sweden).

Two more debuts are also on their way: Ventzislav Vassilev’s Snow about an eighteen-year-old orphan and his difficult experiences in a correctional school produced by 100 Film, and Antoniy Donchev’s The Woman of My Life, produced by Ars Ltd, the first coproduction between Bulgaria and the Kurdistan Regional Government, Iraq, and developed at the MFI – Script to Film Workshop.

Ivan Cherkelov’s Family Relics, produced Gala Film, supported by the Media Program and the Bulgarian NFC, telling three different human stories happening in a deep and muddy forest, is in postproduction. Svetoslav Ovcharov has completed shooting on David's Sling, produced by Omega films, about seven Bulgarian soldiers, who during the Balkan military conflicts, early in the last century had to transport a boat from the Aegean to the Marmara Sea. Ivan Pavlov’s 1968, produced by Аrt 47 looks at the impact of the 1968 Czech Spring in Bulgaria. Ivailo Hristov’s Losers, produced by Pro Film will be a black and white film about a quiet provincial town in which almost nothing happens, until a rock band arrives. Atanas Kiriakov’s Barter produced by Ars Ltd was mainly financed by the BNT.

Fifteen foreign films were shot in Bulgaria in 2014. For five among them the services provider and/or coproducer was the Bulgarian Unified Production Organisation. Different companies connected to the Bulgarian based Nu Boyana Film Studios were attached to three films.

Septembers of Shiraz, produced by Nu Image/Millenuem and directed by Wayne Robert Blair also used Nu Boyana’s services as executive producer in June, while, thanks to the services of Sofilm Production, France’s Poméedela Life, directed by Jérôme Enrico and produced by Légende Cinema shot in Bulgaria between May and August. The Russian fantasy melodrama and high budget Dragon produced by Mirsand Limited and directed by Indar Djendubaev came to Bulgaria for two months. Mihail Shevchuk, another Russian director, also shot his Umbrellas of Sherburg. New Look produced by M-Prodakchn Media in Bulgaria.

Through November 2014, 167 films were distributed. Of those 42 continued their commercial release from the previous year and 19 were European. There were seven new Bulgarian titles. Produced by his company Euro Dialog and without any public support, Niki Iliev’s Living Legends became the most popular Bulgarian film. The privately funded action comedy Rapid Response Corps 2: Nuclear Threat directed by Stanislav Donchev and produced by Pro Films stood in second place. Although its premiere was on 28 November, the first Bulgarian full-length 3D animated film, Balgar – The Movie, directed by Nedelcho Bogdanov and produced by Anturage managed to take the third position. They were followed by Konstantin Burov’s Rat Poison, produced by Bulfilm, Stefan Komanderev’s The Judgment, Valery Milev’s Bulgarian-American action comedy Red Code produced by Bashar Rahal and Paul Hudson. Ivan Nichev’s Bulgarian Rhapsody was released in theatres for a week from 19 September 2014. A second release of the film, this time under the name Path to Costa Del Maresme, started on December 5-th 2014. The 72 minute documentary The Last Black Sea Pirates directed by Svetoslav Stoyanov and produced by Agitprop, which by the end of the year grabbed the 21st Golden Rhyton Best documentary award, received commercial distribution in four theatres in Sofia.

Alexandra Films distributed 54 films in 2014, followed by Forum Film Bulgaria with 39 films. A new player on the distribution market was bTV Studios with 20 titles. The country’s biggest distributor of European films and Bulgarian films A+Films distributed 18 titles, followed by Pro Films with 11 titles, Tandem Film with 9, Art Fest with 8, A+Cinema with 5 and BS Films/Kino Nova with 3.

During 2014, nearly all screens in the country’s functioning movie theatres were digitalised. The digitalisation was not supported by the state, with some exceptions, which this year included the two screening halls of the Festival and Congress Centre – Varna. Both of them were digitalised with the support of the Bulgarian NFC on the eve of the 32nd edition of the Golden Rose NFF in October. Along with its 87 screens,in January Sofia added the Slaveikov multifunctional hall belonging to the French Cultural Institute. The G8 cultural center opened three modern screening halls.

Appointed in March, NFC acting director Georgy Cholakov started to introduce positive changes in the financial support policy. The application formats were diversified and the number of supported projects increased. For the first time since its establishment in 1991, the Bulgarian National Film Center supported low budget feature films, with up to 200,000 EUR per project with a total amount of 1m EUR. Support for short films, established in 2013, rose from 30,000 BGN (15,339) EUR to 50,000 BGN (25,566) EUR. Debutant directors received the possibility to compete in a separate debut category for a maximum amount of 620,000 BGN (317,023) EUR per project.

Bulgarian National Television is still the only TV channel obliged by the law to support independent producers with 10% from its total budget. In 2014, BNT spent less than 3m EUR on production.

In 2014, the public channel coproduced and bought the broadcast rights of 11 feature and documentary films. In-house production, which included eight single documentaries and two documentary series, decreased. Two TV feature films are in production and a teenage 12-episode serial is in preparation.

Unlike previous years, the main Bulgarian TV channels stopped almost all investment in domestic production. One of them, TV 7, endured a heavy financial crash and was obliged to reduce its programming to a minimum.