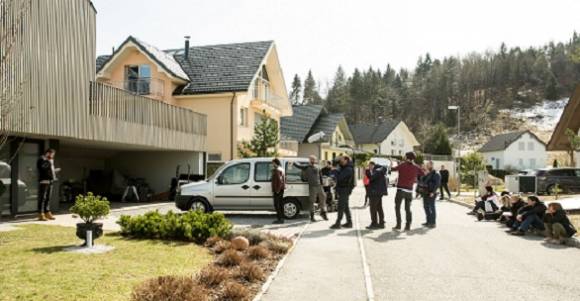 On Friday, 15 March, the shooting of the live-action feature Once Were Humans by the writer and director Goran Vojnović, began in Visoko, on Kurešček hill. The third feature by Vojnović focuses on the pressing issue of migrants. Leo is an Italian who lives in Slovenia. Vučko is a Bosnian who arrived to Slovenia as a child refugee. Leo continues to stay in Slovenia because of his ex-wife Tanja and his son Luka, hoping that they can become a family again. When the bank refuses to grant a loan they need to renovate their restaurant, Leo and Vučko have no choice but to accept an offer from the swindler Gianni. They are tasked with stealing Gianni's truck so that he can collect the insurance money. However, instead of Gianni's truck, Leo and Vučko mistakenly steal a truck full of refugees. Vučko the refugee and Leo the migrant thus inadvertently become responsible for the destiny of people similarly unfortunate as they have been. In order to solve their financial problems, they decide to sell them. At first it seems that they are not indifferent towards these people, but with each passing day there is less and less humanity left in Leo and Vučko.

Goran Vojnović had the following to say about his new project: "The film Once Were Humans is becoming more and more topical from day to day –not because the problem of refugees and migrants in Europe is more pressing today than it used to be years ago, but because we are becoming less and less human as time goes by.«

The film is produced by Boštjan Ikovic from the Arsmedia production house. At the beginning of the shooting, Ikovic stated that the production of this very demanding and important film started very energetically, which would ensure solid foundations for it.

The film is being made with the financial support of the Slovenian Film Centre and with the assistance of the Viba Film Studio.

Goran Vojnović is a director and writer, born in 1980 in Ljubljana. He graduated in film and TV directing from the Academy of Theatre, Radio, Film and Television in Ljubljana. In 2009, he received the prestigious Prešeren's Fund Award and the Kresnik Award for the best novel of the year for Southern Scum Go Home, his debut. In the same year, a successful theatre performance was made after the novel, while in 2013 Vojnović also directed a film based on it, for which Dino Hajderović, Ivan Pašalić and Jernej Kogovšek received the Vesna Awards for Best Supporting Actors at the 16th Festival of Slovenian Film. Chefurs Raus! is Vojnović's second feature, as in 2010 he had also shot the film Piran - Pirano, based on his own screenplay, as well as several shorts over the years. In 2012, Vojnović published his second novel Yugoslavia, My Fatherland, for which he received his second Kresnik Award. He received the third Kresnik Award for his third novel The Fig Tree, published in 2016.