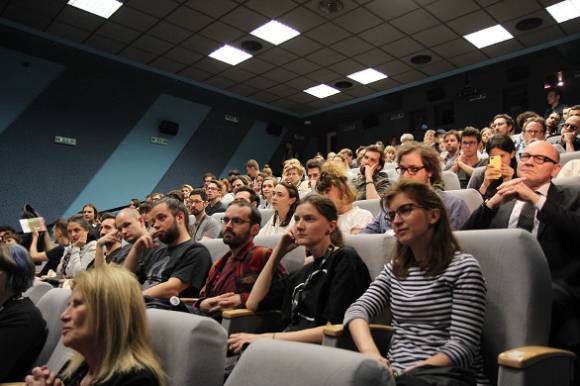 The international event, held from March 19th to March 23rd at the Film and TV Faculty of the Academy of Performing Arts in Bratislava, introduced seven renowned filmmakers in addition to quality films. During the five-day program, they held masterclasses and discussions with participants.

A balanced program from the world of film production was presented by Haneke's long-term  editor Monika Willi, the favorite of world-wide film festivals Sergei Loznitsa, production designer of Cuarón´s ROMA Eugenio Caballero, cinematographer Phedon Papamichael, who has an Oscar nomination for Nebraska, Citizenfour cinematographer Kirsten Johnson and others.

The opening film of the event was the award-winning black and white film ROMA by Alfonso Cuarón. It was personally introduced by the film’s production designer, the Oscar-winning Eugenio Caballero. The Mexican filmmaker had a lecture on production design in film the next day, where he mentioned: „A production designer is one of the key figures in making a film. For me, production design is not an aesthetic discipline but a narrative. It's not just what it looks like, but the fact that everything we see on the screen is connected with the director's effort to tell the story. And finally, to feel emotions.”

The program continued with a lecture by Moroccan guest Hakim Belabbes, who explained the conditions for the creation of the Sahara Lab. This offers a chance for ambitious filmmakers in Morocco to study film. An important message that Hakim emphasized to the forum's visitors was: „I wasted so much time copying instead of bringing a personal message. I didn't find the message in the movies of other directors, in the theoretical books, but in the voice of my mother, my children, and the moments of silence on my way home."

Wednesday evening ended with the screening of the film Cameraperson, which was personally presented by producer, cinematographer and documentary filmmaker Kirsten Johnson. The screening was followed by a discussion during which American filmmaker was not afraid to come among participants and ask questions. The intensive interactive discussion attracted the audience, who also came to see her masterclass the following day. Kirsten Johnson ended the masterclass with a social experiment, where participants in the cinema were gazing intently into the eyes of another participant for two minutes. Kirsten: „Director of photography shouldn't be afraid to watch, observe, keep eye contact. Sometimes it is uncomfortable to see and be seen. Such fear and shame should not be present when filming a movie. By visualizing we will learn more than by talking, by using words.”

The rest of the day belonged to the Ukrainian director Sergei Loznitsa, whose lecture brought a number of interesting starting points for shooting. In the evening he presented his film The Trial at Cinema Lumiére, where he was also awarded with the Prize for the contribution to auteur cinema by the Association of Slovak Film Clubs. Sergei Loznitsa says: „I think that the future of film can be in archives. With technology, cinema can also go in this direction.”

Friday began with a masterclass on the distribution of short and feature films. This was led by a sales agent from Poland, Marcin Łuczai who is working for New Europe Film Sales. In the evening, Haneke's long-term editor, Monika Willi, came to present her masterclass on the creation of a material story. In the evening, she personally presented Untitled, which she completed after the death of the director Michael Glawogger. Willi: „Michael Haneke has a movie in his head before he stars shooting. He wants to cut chronologically, and the first cut design is created during filming when daily materials come. Unlike other directors, who, on the contrary, collect all the material and want the best of the film to appear in the editing room.”

Saturday's program was dedicated to the director of photography Phedon Papamichael. In addition to a masterclass in the evening, he personally introduced the film Nebraska by director Alexander Payne, that got 6 Oscar nominations. Papamichael: „The most important benefit of a film school is to find your director, your group and the collaborators you can work with after school."

The filmmakers themselves and the school representatives came to present the student projects. In the discussion after screenings, students talked about the films themselves, as well as the conditions in which the films were made.

Tweet
More in this category: « The shooting of the feature Deadlock by the director Vinko Möderndorfer begins Mogador's Christoph Thoke appointed member of Main Jury at ART FILM FEST, Kosice, Slovakia »
back to top