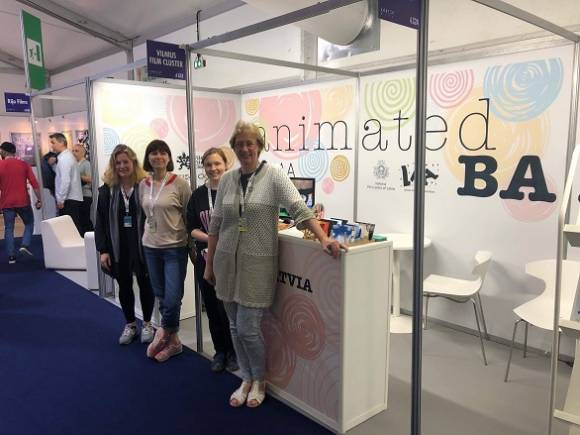 Latvian animation is busy participating at the Annecy International Animation Film Festival 2019  - both with the feature film ‘Away’ (dir. Gints Zilbalodis) in the Contrechamp competition program and a MIFA Animated Baltics stand (June 11-14).

‘Away is told in four chapters, and centers on a young boy stranded on his own, trying to survive in a mysterious land. Pursued by a dark spirit, he makes his way through shimmering deserts and lush forests with the help of a small bird acting as his guide. Zilbalodis, in his early 20s, worked on the film entirely on his own for three and a half years — including writing, design, modeling/rigging, animation and even composing the music.’

Sales rights for the film has been picked up by Cinema Management Group (CMG), who did several ‘Away” market screenings in Cannes and has already closed several sales prior Annecy premiere, including Front Row Filmed Entertainment for the Middle East and Film4You for Poland.

This year all three Baltic countries (Latvia, Lithuania, Estonia) have joined the creative forces and will at MIFA represent the whole region under the umbrella of the ANIMATED BALTICS stand. Latvian representatives include the director of the Latvian Animation Association Anna Zača, animation expert Ieva Viese-Vigula, Eva Erdmane-Durandina from the National Film Centre of Latvia as well as the animation artists Gints Zilbalodis and Kārlis Vītols.

Latvian animation has been a frequent guest in Annecy Competitions, several films by such artists as Vladimir Leschiov, Signe Baumane, Indra Sproge and Edmunds Jansons have been selected previously.

Tweet
More in this category: « A Showcase of the Best in Central and Eastern European Animation in Annecy MIDPOINT new partnership with Film Centre Montenegro »
back to top