BELGRADE: The documentary In Praise of Nothing (2017) by Serbian director Boris Mitić was the most watched documentary on MUBI in 2019, the platform announced as part of its first annual awards. This ‘feelgood documentary about Nothing' is a Serbian/Croatian/French coproduction, shot in 70 countries, narrated by Iggy Pop and scored by cabaret grandmasters Pascal Comelade and The Tiger Lillies.

We are happy that tx-reverse 360° will be shown at Sundance Film Festival 2020 / New Frontier (Park City, USA), 23 January to 2 February 2020. So far the film has received 53 invitations to film festivals and won 8 international film awards!

Back in the 1990s, Martin Reinhart invented a film technique called "tx-transform", which exchanges the time (t) and space axis (x) in a film. Normally, each individual film frame represents the entire space, but only a brief moment of time (1/24 second). In the case of tx-transformed films, however, the opposite is true: each film frame shows the entire time, but only a tiny part of the space – in cuts along the horizontal spatial axis, the left part of the image thus becomes the "before", the right part the "after".

20 years after Martin Reinhart and Virgil Widrich used this film technique for the first time in a short film ("tx-transform", 1998), they again deal with the question of which previously unseen world arises when space and time are interchanged, aptly in a cinema and at full 360°: at the Babylon Kino in Berlin they filmed with the OmniCam-360 about 135 actors and calculated the short film "tx-reverse" from this material.

ZENICA: CineStar, the largest multiplex cinema chain in Bosnia and Herzegovina and the region, has opened its fifth multiplex in the city of Zenica on 17 December 2019.

CINESTAR CINEMAS OPEN THEIR 5TH MULTIPLEX IN BOSNIA AND HERZEGOVINA

On 17 December 2019, CineStar Cinema chain in Bosnia and Herzegovina is richer by another site which was opened in the city of Zenica, in Central Bosnia.

ZAGREB: American media mogul and founder of E! Larry Namer is currently in Zagreb, where an episode of the documentary series Explore the World has recently been filmed. 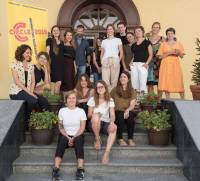 The call for the exclusive one-year training program CIRCLE will be announced by 20 January 2020. We are looking for up to 10 female filmmakers (directors and/or producers) with a strong documentary project in any stage of production (from development to rough cut) who are seeking further support to upgrade their professional skills, develop films with leading experts and bring them to the wider professional audience

Wrapping up things during December 2019 is just a thing one does, it is in our bones. Ideas, conclusions and plans are in the very core of the final days of a year and in the CIRCLE’s project book they are noted with ambitious flavor.

CIRCLE Women Doc Accelerator, program for documentary filmmakers and producers who are developing internationally potential projects, is concluding its vibrant sophomore year with an optimistic look towards the next endeavors. Launched in 2018, CIRCLE is training initiative with the main goal of empowering women who work in the film industry through the development of their own projects, as well as through polishing of their professional skills. Introducing them to the current tendencies and tools, as well as providing them with insights in market positioning and networking are some of the pieces of a puzzle called contemporary film-making.

“CIRCLE is a filmmakers initiative born out of craving to have a platform where we can in confidence exchange about our projects, helped daily by carefully chosen experts in order to assume our desires as filmmakers and to work together towards the excellence. We are offten too impressed by the industry expectations and forget that we are artists who think through our films. This space of solidarity is something I missed in my early development.“

“I think it's very unique workshop, because I was feeling individual approach to each project. Sometimes you have to protect your film during such programs, but CIRCLE creates this space of trust where you could share your doubts and fears with tutors and participants.“

Since the whole idea of CIRCE is to promote and equip individual female authors for their careers, the list of professionals responsible for the the transfer of knowledge has to be from the top tier. And in 2019 it was pretty much stellar. It all started with the first module in Podgorica (Montenegro) with Rada Šešić, director and selector of The Competition Programme - Documentaries at Sarajevo Film Festival and member of selection teams of IDFA Amsterdam and IFFR Rotterdam; director of the DOK Co-Pro Market, DOK Leipzig’s Brigid O'Shea; scriptwriter and story editor Simona Nobile who is MEDIA, Eurimages and MIBACT consultant and EWA representative. Along them the first module was organized with the input from Tamara Kotevska, co-director of film Honeyland, this year's triple winner at Sundance Film Festival; Goran Dević, director of numerous awarded films, professor at Academy of Dramatic Art Zagreb and producer, distributor and director of Liburnia Film festival Oliver Sertić.

The second module in Novi Sad was especially productive with Joana Solecka, marketing expert and a great connoisseur of everything that we call "audience design"; film editor and documentary script consultant Phil Jandaly; Aleksandar Govedarica - sales agent for Syndicado, one of the leading documentary distribution companies; Jelena Mišeljić - producer, programmer and professor at the Faculty of Dramatic Arts in Cetinje; Ivana Mladenović (Serbia, Romania) - director of the award-winning films Soldiers. Story from Ferentari and Ivana The Terrible, which won the Special Jury Prize in Locarno in 2019 and has been analyzed through a case study; Maša Marković - Cinelink Coordinator and Selector of "Dealing With the Past" program at the Sarajevo Film Festival.

“CIRCLE workshop has been crucial for me and my film project since its my first feature length and getting into the environment of unique expertise in documentary, but at the same time very open, friendly and encouraging, helped me to understand better which path to choose to continue development and enter production of the film, build up a great network with other participants, tutors and film professionals during the workshop sessions and our delegation in Dok Leipzig Co-production market.”

The year-long process of CIRCLE concluded at DOK Leipzig where all the participants had a chance to  impress their colleagues at the 15th DOK Co-Pro Market. EWA – the European Women’s Audiovisual Network has awarded the EWA Development Prize for the best project by filmmakers in the Circle Women Dok Accelerator. Their decision was to split the award to two projects. The financial support went to Between Two Wars by Alina Gorlova and Anna Savchenko received mentorship support to further development of her project 72 Hours for a whole year.

Of course it has to finish with the awards – it is December after all. Preparations for the third CIRCLE Women Doc Accelerator are underway and during the January it will all start again: discovering the uncut film gems brought to surface by talented and diligent women film-makers from Europe.

The program is organized by the production company Wake Up Films from Novi Sad in cooperation with UnderhillFest from Podgorica, DOK Leipzig Festival, European Women's Audiovisual Network (EWA), MEDIA Desk Serbia, MEDIA Desk of Montenegro and with the support of the Film Center of Montenegro, Serbian Film Center, City of Novi Sad and the The Petrović Njegoš Foundation.

The Painted Bird Sold to Canada

PRAGUE: The Czech/Slovak/Ukrainian coproduction The Painted Bird by Václav Marhoul has been sold by Celluloid Dreams to the Canadian distributor Northern Banner Releasing. The Painted Bird is shortlisted by the Academy of Motion Picture Arts and Sciences in the International Feature Film category.

KYIV: The Ukraine is launching a cash rebate for foreign film productions starting 2020. Feature films, documentaries and animated films can apply, as well as TV feature films or animated series, commercials and music videos. Under the scheme foreign productions will be able to get back up to 25% of the qualified costs for producing films in the Ukraine, and an additional 5% if they pass the cultural test on Ukrainian subjects.