Interview with Dariusz Jabłonski, the Artistic Director of the Independent Film Foundation 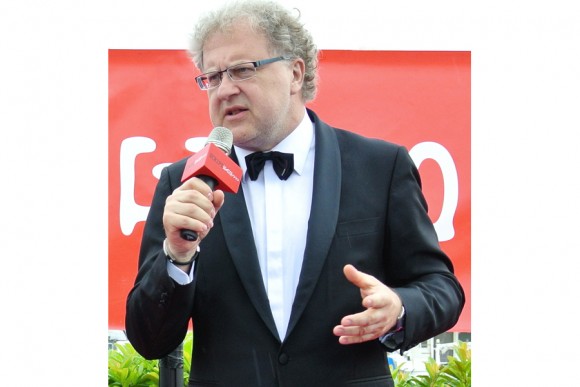 FNE: How and why was Scripteast created?

Dariusz Jablonski: ScripTeast was born thanks to the cooperation with Sundance Institute, which we started in 1995. We liked their very unique and original method of helping scriptwriters based on the practical way of free discussions between the advisors and writers after reading a specific script. Together with Sundance and the Hungarian company Eurofilm we created five successful workshops.

When Poland joined the European Union and the Media Programme was available for us, we thought that it was time to come up with our own original concept. We took to the method that is used by Sundance Institute for beginners and we’ve adapted it to the best writers.

Writers, directors and filmmakers in general were at the top of society during communism. When communism fell in Eastern Europe, they were thrown into the ocean of capitalism all of a sudden. Our cinemas became totally open and started screening even not very good films! All outstanding scriptwriters with a huge and deep culture behind them felt frustrated, as if they didn’t fit in the world that they were watching in cinemas. That’s why we’ve created the ScripTeast programme ten years ago, to help them.

FNE: How do you measure the success of your endeavor?

Dariusz Jablonski: At the beginning, we were having hard discussions with the people from the Media Programme who didn’t believe that we knew exactly what the needs of Eastern European scriptwriting were. We as practitioners, successful producers rejected all the elements of “traditional teaching” in favor of practical assistance with the script re-writing, which we truly believe is the best “teaching”! We got support initially for one year and the exact realization of the plan convinced them.

But after three or four years we said: “Okay, well… great programme realized…, but where are those films that we’ve helped?”. There were some already made but we wanted more. All of a sudden, after seven or eight years we saw an eruption of those films finished. It means that we were too impatient; we were expecting to have results after three or four years. It also means that the circle from the script to the screen in Eastern Europe lasts longer than in Western Europe, not two or three years but an average of five, six years. Now we see them all, so many of these films have been made from a script of a much better quality than at the stage of submission.

Thus, more than 150 writers have gained completely new knowledge about themselves, their writing, plus the international reception and the international impact that their work could have. They are certainly much better writers now, all of them. It’s not necessarily all about their ScripTeast script, it’s also about their future, their next film after this script, then the next one.

I also think that this is a part of the successful result, that they come with us to Cannes and Berlin festivals where we have sessions in between our programme. They can watch the films in competition and sidebar sections, they are also encouraged to visit the Co-production Market. It is not only about creating, but also about what travels best - what is sold, what is not sold, what is happening at present, what other people are writing.

We spend seven days in Cannes with the writers and we tell them: “Listen, if you are interested in being successful internationally, you’re at the right place. You see that red carpet, the red stairs? This is doable! This is not closed-off for people from Eastern Europe. In fact, it’s the complete opposite: we come from countries with an extremely rich film culture. Those red stairs are absolutely in your reach and you can be there with your film very easily.”

FNE: Which factors do you take into consideration when selecting the scriptwriters?

Dariusz Jablonski: We have three equally important factors, which we take into consideration when inviting scriptwriters to our programme and maybe this is because of our producing background. If we want to spend our time on running ScripTeast instead of making films, it is because we want to see the impact on the screen.

The first is the script itself. The second is the writer. If he/she already has international success, could it be journalism, theatre plays, a short film or music. We need something that shows us that the writer wants to be international.

The third thing is how likely it is that the film will be made. We have consultations amongst key players (using our wide network in Eastern Europe of producers, festival organizers, national funding bodies) and we simply, confidentially ask: “Do you think this script has a chance of being funded?” It does not mean that the absence of such confirmation eliminates the script, it is only one-third of the evaluation.

We want to ensure that we will see the work on the screen, because ScripTeast is a very high profile, top-level and expensive training programme. We don’t want to misuse resources we are lucky to raise funds from Creative Europe - MEDIA Sub-Programme of the EU, the Polish Film Institute, sometimes Polish Television and the National Centre for Culture Poland, Mazovia Warsaw Film Commission, and of course on top from our company Apple Film Production. We want to keep those very precious resources to spend them on films which will be made. Also, let’s evaluate the production of the films from Eastern Europe, which is much lower than in the West, to see that this money has not been wasted. Each film is a chance to conquer the world and let it become a better place through good movies.

FNE: Which Polish script are you the most fond of?

Dariusz Jablonski: All invited scripts are according to us the best choice. After the year long programme, we ask the Artistic Board which reads all the improved scripts before Cannes: “Which of these Eastern European scripts would you like to see first on screen?” And this is the ScripTeast Krzysztof Kieslowski Award which immediately adds chances for the script to be made.

We are very happy for two Polish scripts which were given the Krzysztof Kieslowski ScripTeast Award for Best Eastern and Central European Script: The Day of Chocolate by Jacek. P Bławut and Mute by Bartek Konopka and Przemek Nowakowski.

We invited our closed friends Manfred Schmidt, Sandy Lieberson, Antonio Saura and Simon Perry to the Artistic Board of ScripTeast. Perry was somehow my main inspiration, he is the man who as the Head of the British Screen had chosen Eastern European scripts such as Before the Rain by Milcho Manchevski or No Man’s Land by Danis Tanović, and helped them become such successful films. All the members were among my tutors at the beginning of 90s when I was trained to become a better producer, and we became friends for life. Our great friends Head of Studies Tom Abrams and Christian Routh strengthen them. With them we have worked for nine years already.

We are very careful about not being protective to Polish scripts, we want the competition to be fair, so we said at the beginning: “Please, don’t think that you have to award a Polish script as Poles significantly funded ScripTeast! Just think about the script which deserves the award!” In those two cases they said: “We did exactly that, and this is the best script”. Of course we were very proud, even if we didn’t show it.

The bitter pill was that both scripts, after being so appreciated by the international board and advisors, met some domestic obstacles. With all due respect to domestic evaluation, if the script is appreciated abroad by such giant international professionals, this is the best direction that the writers could take and the best suggestion that we could get is to finalize the script immediately and check if this potential international success is really possible to be achieved.