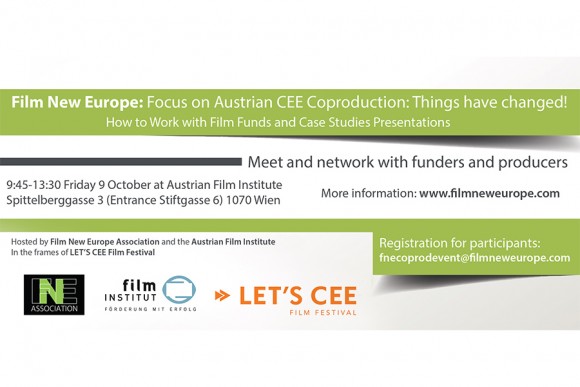 There is a whole new landscape out there in the countries of central and Eastern Europe. Award winning coproductions, tax incentives, big budget Western productions and national and regional funds. Austria has invited its neighbours for the first time to find out what Austria has to offer and to catch up on the fast changing landscape of the film industry of central and eastern Europe.

This event is part of a series of events organised by FNE Association aimed increasing audiences and the international visibility of films from the region by sharing successful models for projects that cross borders. The FNE Association is made up of the heads of the leading film institutions across the central and eastern European region. It is the leading networking platform for the film industry in the region and has been effectively promoting and representing film professionals since its inception.

The participation is for free but participants should register : This email address is being protected from spambots. You need JavaScript enabled to view it.  Participants will receive a confirmation email that will admit them to the event.

The heads of the funds in the region will present the possibilities of funding for regional coproductions. Case studies of successful international productions from the region which were successfully coproduced will be presented by leading producers in the region followed by a Q&A and networking brunch.
9.45-10.00 Welcome by Roland Teichman, head of Austrian Film Institute and Marketa Hodouskova, General Secretary of Film New Europe Association

Marketa Hodouskova will present the FNE Association and its work
10.00-10.35 presentation of Slovak and Austrian funds:

Slovak Audiovisual Fund,  presented by Anton Škreko, General Director of the Media, Audiovisual and Copyright Department of the Ministry of Culture of the Slovak, presentation of new Slovak tax incentives and Weinstein Company TV series Marco Polo 2 that shot in Slovakia due to the tax incentives scheme.

UPDATE: Click HERE to see photos from the event