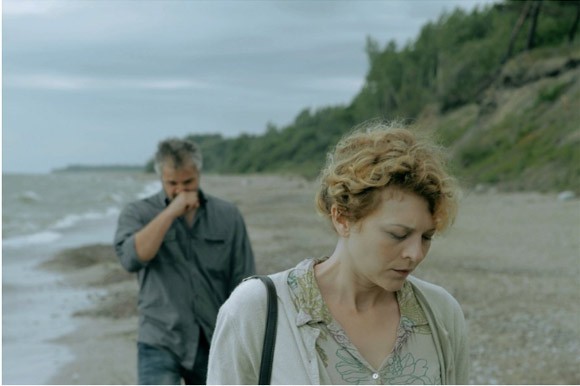 The Gambler by Ignas Jonynas

The Lithuanian film industry noted several recent successes with films selected for major festivals that found favour at the local box office and with the announcement that 23-year old Lithuanian actress Aistė Diržiūtė had been selected as one of the EFP Shooting Stars of 2015. The foreign film servicing industry continues to do well.

Lithuanian production companies are typically small in size and focus on producing features or documentaries. In recent years Lithuania has been producing an average of four feature films annually with an average budget of 1m EUR; however the number increased to eight features in 2014, with state support of 1,813,629.52 EUR (6,262,100 LTL). Six of them are coproductions with France, Latvia, Estonia, Romania and Finland. There were 16 feature films applying for the state support, many of them are genre films: a psychological thriller, comedy, romantic horror film and historical melodrama.

The Lithuanian audiovisual industry depends on funds from the Lithuanian Film Centre, private funds, coproducing with foreign companies and pan-European film support initiatives, such as the MEDIA Programme and Eurimages.

The new Lithuanian tax incentives went into effect in January 2014. Since then both domestic films and coproductions involving a Lithuanian coproducer are able to claim up to 20% rebate on a minimum spend of 35,000 EUR. Minority coproductions are also encouraged to apply for the rebate which is guaranteed through the end of 2018. The tax incentives scheme is administered by the Lithuanian Film Centre.

The most important film of 2014 was the The Gambler (Lošėjas), a Lithuanian-Latvian coproduction from director Ignas Jonynas produced by Studio Uljana Kim and Latvia's Locomotive Productions. The Gambler was the first Baltic feature to have its world premiere at the San Sebastian Film Festival, screening in competition and won a Special Jury Prize at the Warsaw IFF. The film was supported by the Ministry of Culture of the Republic of Lithuania, the Lithuanian Film Centre, the Latvian Film Centre, Eurimages and the MEDIA programme. The Gambler won five national film industry Silver Crane (Sidabrinė gervė) Awards, including the best feature film, best director and best actor for Vytautas Kaniušonis.

The debut feature Non Present Time (Nesamasis laikas) by Mykolas Vildžiūnas and produced by Just a Moment achieved good critical reception in Lithuania. The film was financed in part by the Lithuanian Film Centre, which contributed 210,000 LTL, the Vilnius city municipality which contributed 9,500 LTL and private sponsors which contributed about 15,000 LTL.

The feature film The Summer of Sangaile, Lithuanian-French coproduction from Fralita Films and Les Films d‘Antoine directed by Alanté Kavaite was selected for World Cinema Dramatic Competition at the 2015 Sundance Film Festival. The film is about a teenage woman obsessed with stunt planes who forms a unique relationship with another young woman over the course of a summer aeronautics show. The Summer of Sangaile received 231,696 EUR from the Lithuanian Film Centre and was supported by the Eurimages Fund.

The Lithuanian Film Centre primarily finances up to 50-75% of development or production, and up to 75% of low budget or experimental films. France is the leading coproduction partner country.

The feature length documentary film Radviliada (2014) from director Ramunė Rakauskaitė about the nobility of the Radziwiłł family has become the sole educational Lithuanian film which gained popularity with a wide audience.

There are 95 screens in Lithuania, which the film center considers to be too few to provide access to films in smaller cities. Scandinavian-owned Forum Cinemas, the owner of the largest chain of movie theaters in the country, has six multiplexes with 40 screens, all fully digitalised.

The action-comedy-thriller by Emilis Vėlyvis Redirected/Už Lietuvą!,a coproduction from Lithuania's Kino Kultas and Meed Films and the UK’s Wellington Films, has become the most profitable Lithuanian movie at the national box office in 2014. The premiere screenings in Lithuanian cinemas drew 55,570 viewers over the three day weekend and took in 266,916 EU (921,608 LTL). Redirected/Už Lietuvą! has become the all-time record-breaker in Lithuania. It was released on 7 November 2014.

The most important film institution in the country is the Lithuanian Film Centre which was launched in 2012 and is headed by Rolandas Kvietkauskas. The long awaited LFC was set up after extensive lobbying by the Lithuanian Independent Producers Association and Filmmakers Union. It has had a huge impact on the local industry, which previously lacked a central body to represent it. The LFC primarily finances development and production.

In February 2010, Lithuania celebrated its return to the international sales scene with a stand at the European Film Market at the Berlinale. In February 2011 Lithuania was present not only at the Berlinale but also at the market in Cannes driven by the newly active Independent Producers Association. The Lithuanian Film Centre was approved by the Lithuanian government on 19 April 2012, as a result of a new film law introduced in December 2011. The Vilnius Film Office was established at the end of 2011. A public nonprofit entity, the Kaunas Film Office was established in 2012 as the result of a joint effort between the Kaunas municipality and Kaunas Cinema Studio. Kaunas Film Office is a member of the European Film Commissions Network.

Lietuvos rytas TV is a Lithuanian entertainment channel founded in 2008. Lithuanian journalist Edmundas Jakilaitis was the first channel manager. In January 2013 he was replaced by Linas Ryškus. Some 55% of all programmes are from foreign countries. Lietuvos Rytas TV replaced Lithuanian station Penktas Kanalas ("Channel 5"). It is part of Lietuvos Rytas Media Group. TV6, which was launched in 2002 and is a Lithuanian terrestrial, satellite and cable television channel owned by the Nordic television company Viasat.