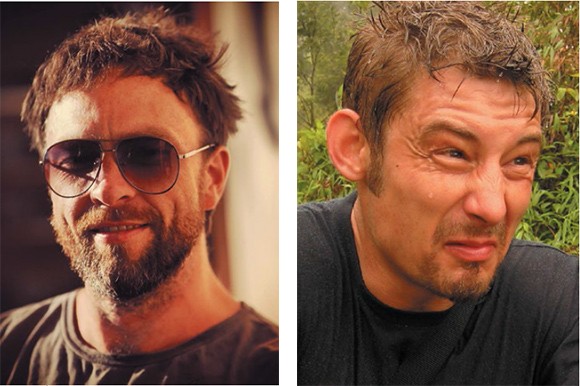 When he hears about the last native balinese tribe living in the very east of the island, he convinces Kasia to take a two-day trip to the Agung Volcano in the same area. In the village at the end of the road, they meet up with a friendly local by the name of Sabit. He offers the couple a place to stay and to show them the way to the crater of the volcano. Kasia feels uncomfortable and out of place in this foreign land, but feigns interest for the sake of her husband. However, something seems off about Sabit and everything else in the town. They spend the night in a simple house with the local family, and one incident after another prevents them from leaving. Now and then misunderstandings arise between Kasia and Tomek, hidden differences and resentments come to light. Kasia grows uneasy about the host, suspecting him of bad intentions. She has nightmares, where she experiences reoccurring visions of a mysterious symbol, strangers in masks. In the meanwhile Tomek becomes obsessed and jelaous by Kasia's good relation with Sabit. The psycho- sexual tension grows. During a ritual taking place in the village, Kasia falls into a trance and discovers that the master of ceremony wearing a devil mask is none other than Sabit.

Tomek kills Sabit when he catches him trying assult Kasia. But the local family has nothing against this violent act, on the contrary, it seems like it is a planned event, a part of an even bigger ceremony taking place every year. Kasia and Tomek play the main roles in the grande finale. As tensions, and sanities, grow thinner, will the tourists be able to make it out alive or will they be trapped by the ominous fog that hangs low over the village?

His travel articles have been published in several Polish travel magazines like Extremium, Poznaj Świat and also in Gazeta Wyborcza. In 2009 his scenario “Agung” (which was written together with Paweł Ferdek) was awarded in international festival for scripts – writers – Międzynarodowy Festiwal Scenarzystów INTERSCENARIO in Wrocław.

In 1998 he made his debut as a traveler co – organizing a three- month expedition to the Ecuadorian jungle. In 2005 he was awarded in one of the biggest Polish travel festival KOLOSY. An Integral part of this trip was a research project carried out by the dr A. Penkala from academic scientific association of Adam Mickiewicz University of Poznań. Summary of these studies was a book written by dr. A. Penkala, which published part of Arun’s travel diary. Since then, the traveler has visited Indonesia, Papua New Guinea and Madagascar where he worked and lived with the locals. He is currentlywriting a book.

Paweł Ferdek, born in 1977 in Poland is one of Poland's most talented and original director and screenwriter. His documentary films was screened at festivals around the world, his fiction debut (as a screenwriter) was acclaimed by critics and audience as the freshest film of recent years in Poland.

Ferdek graduated from European film program EKRAN in Andrzej Wajda Master School, Warsaw University’s Institute of International Relations and Academy of GARDZIENICE Theatre Company (work based on Jerzy Grotowski’s method). He also studyied in Werner Herzog's Rogue Film School in Los Angeles. Ferdek shot documentary films in Poland, Israel, Palestine, Kyrgyzstan, China, USA. With his “Glass Trap” nominated for an EFA Award, he is a member of European Film Academy. He wrote an acclaimed script for feature fiction film "Ki" -it was selected for the Venice Film Festival 2011, won an Award as Best Polish Film at Off Plus Camera festival in Krakow, was distributed in cinemas in Poland and France. He is working for cinema and TV. His films was broadcasted in TVP, TVN, Canal +, Planete, ARTE. He's also a traveller and photographer. In 2004 he bought an old motorbike in Himalaya and drove back to Poland without documents and cash. In 2008 he lived 3 months in Indonesia and Papua New Guinea with local tribes.