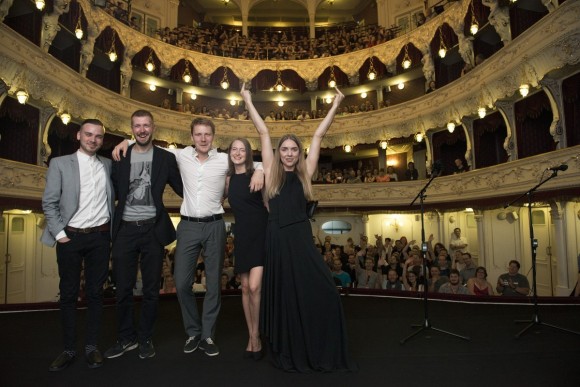 Triin Ruumet’s debut feature “The Days That Confused” received the Jury Special Mention prize from the East of the West competition program at the Karlovy Vary IFF. The international premiere of the film also received a 10,000 USD prize with the award.

“The Jury award is a big honor for our film. Especially as Karlovy Vary is an A-list film festival. We screened the film “The Days That Confused” for the first time internationally at Karlovy Vary and we are extremely happy to have been honored. We have a row of other festival invitations awaiting us, the first of which will take us to the Palic Film Festival in Serbia,” commented the film’s producer Maie Rosmann-Lill.

The Grand Prix of Karlovy Vary’s East of the West program went to the film “House of Others” directed by Georgian Rusudan Glurjidze. The most important prize of the festival, the Crystal Globe, went to the Hungarian director Szabolcs Hajdu for the film “It’s Not the Time of My Life”. The 51st Karlovy Vary International Film Festival took place from July 1-9.

“The Days That Confused” screened domestically to 63,000 viewers. The film is still available on the Telia video rental and the DVD will be available in stores at the beginning of September. The tragicomedy spiced with dark humor takes place in the second half of the 1990s. The main character is Allar (27) and the film follows his path from one party to another across Estonia as he comes into contact with colorful characters and confusing situations. The tense and absurd events make Allar think about the decisions he’s making and become his soul-searching path through Estonia of the nineties.

„The Days That Confused“ is director Triin Ruumet’s first full-length feature film. The main characters are played by Hendrik Toompere Jr. and Juhan Ulfsak. The film was produced by Kinosaurus Film and supported by the Estonian Film Institute and the Estonian Cultural Endowment.

Tweet
More in this category: « The winners of Works in Progress Award and Eurimages Lab Project Award @KVIFF 2016 Seven Lithuanian films at the European Film Festival Palić »
back to top