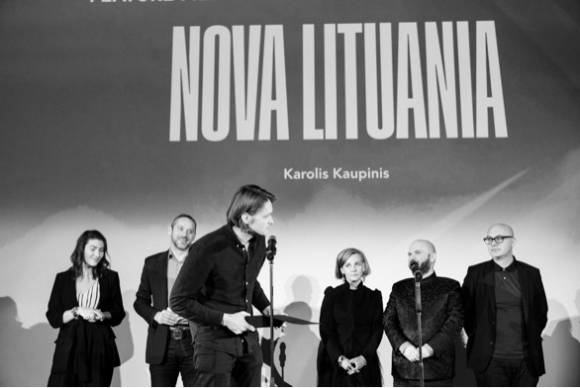 Having attracted the largest number of visitors since its inception, the sixth Riga International Film Festival (RIGA IFF) marked the event’s closing with its Award Ceremony. The festival’s main prize for best feature film was awarded to Lithuanian director Karolis Kaupinis for the visually sophisticated historical drama Nova Lituania.

Ten films from the Baltic and Nordic countries were screened in the FEATURE FILM COMPETITION programme; Latvia was represented by Laila Pakalniņa's documentary Spoon. The international jury awarded the main prize to the black and white film Nova Lituania, about a unique and seemingly extravagant event in Lithuanian history. ‘The faintest glimmer of utopian possibility lights up the dark days of 1930s Lithuania in this tonally assured historical drama. This is a humanistic and finely crafted feature debut, which impresses both with its maturity and with its timely and poignant political message’, is how the jury explained its choice. The members of the jury were: Paolo Bertolin, member of the selection committee of Directors' Fortnight at the Cannes Film Festival; Rhidian Davis, curator, writer, and Cultural Programme Manager at the British Film Institute; film director Rugilė Barzdžiukaitė – a member of the artist trio from Lithuania whose  performance was awarded the Golden Lion at the Venice Biennale; Kristi Porila, a film distributor from Estonia; and Gints Grūbe, a producer, director and screenwriter from Latvia.

As a reminder that a film can only be made through collaboration, the RIGA IFF Award is an eight-part bronze sculpture of the festival’s symbol – the Riga Rooster designed by Ervins Broks. The winning film’s director also received a monetary award of EUR 2000, sponsored by AAS BALTA insurance company.

It was yet another Lithuanian film that received Special Recognition by the jury – Animus Animalis (A Story of People, Animals and Things) by Aiste Zegulite – a documentary about taxidermy and the theme of conflict between the human and animal worlds that makes us ask: Can we bring the dead back to life? In acknowledging the film, the jury stated: `we [have] agreed on awarding a special mention to a haunting cinematic object that casts a deep gaze into the eye of the other, projecting a reflection of the human in its obsessions and limitations. As the desire to win mortality and impermanence turns the perishable life of animals into undying objects, the director seduces and questions the viewer with a collection of images ranging from the cruel to the ironic, from the pragmatic to the surreal.’

The jury comprised of members of the Latvian section of FIPRESCI (the International Federation of Film Critics) awarded their prize to Scandinavian Silence, a graphically sophisticated psychological drama by Estonian director Martti Helde about a sister and brother who are haunted by an incident from the distant past. As the jury stated: ‘The refined monochrome imagery and sound nuances of this film reveal a subtly polyphone narrative structure, with the big screen highlighting the evocative resonance effect on the viewer.’ Seducing its audience with excellent cinematography, music, and a powerful screenplay, the film also received the People's Choice award from the festival's main venue, cinema Splendid Palace.

The RIGA IFF Children's Jury selected the German film Rocca Changes the World as Best Film. The film successfully interweaves dynamic storytelling with socially relevant topics while emphasising the use of social media. Based on Swedish author Astrid Lindgren’s novel Pippi Longstocking, this film is a great example of how to present a classic in a new way.

The international jury judging the competition section of SHORT RIGA – the festival's programme featuring short films, experimental films, and music videos – awarded the main prize to Regina Pessoa's animated short film Uncle Thomas, Accounting for the Days. The winner received a monetary prize of 1000 EUR along with the Grass snake silver pin made by artist Maija Vītola. This film is also the RIGA IFF European Film Academy Short Film Candidate. ‘This short combines the perfect formula of craft and storytelling with a calculated approach to enagaging the audience. The experience is multiplied through the addition of mental health, leaving the jury undivided in their praise for the film’, stated the panel.

As part of the SHORT RIGA programme, the Baltic Music Video Competition marked its fifth anniversary this year. ‘It is a bold, amazing, beautiful and unusual world, and as we watch videos within the framework of the festival, we enrich our understanding of the diversity of audiovisual art forms’, comments curator Agnese Logina. Once again, Lithuania took the top spot in this competition with the music video directed by Titas Sūdžius for the song Liūdnos akys by the group Garbanotas.

The Riga International Film Festival took place from October 17 to 27 at the Splendid Palace, K.Suns, and Kino Bize movie theatres, as well as at the National Library of Latvia and Kaņepe's Culture Centre. A total of 148 films were screened as part of the festival’s eleven programmes, complemented by a variety of lectures, discussions and other events.

RIGA IFF is supported by the Culture Capital Foundation of Latvia, the National Film Centre, Live Riga, and the Riga City Council.