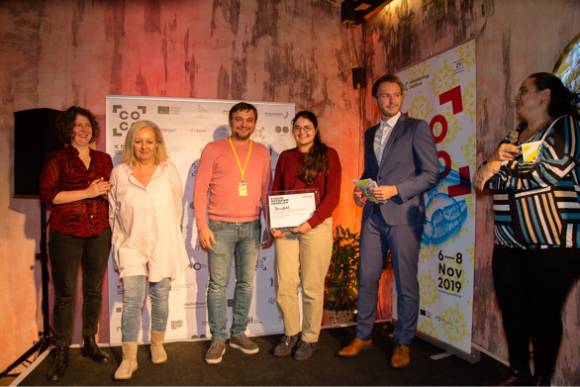 While the 21st edition of connecting cottbus (6-8 Nov 2019) continues with further matchmaking and networking events, tonight the East-West co-production market at FilmFestival Cottbus announced the award winners out ofitsselection of 13 cocoPITCH and 6 cocoWIP projects.

The coco Best Pitch Awardgoes to the best public presentation of a project during the pitching, voted for by all attending industry participants. The audience chose CARBON by Ion Borș from Moldova, an absurdist road movie set during the armed conflict in Transnistria in the early 1990s. CARBON was presented by the producersSergiu Cumatrenco Jr. (YOUBESC Creative Institute) and Ion Borș (Kantora Film Production), whoreceives a cash prize of €1,500 as well as the Producers Network Award, a free accreditation to the Producers Network at the Marché du Film in Cannes 2020.

TheAvanpost Pitch Packaging Awardwas handed out to ATHLETEby co-directors Semih Gülen and Mustafa Emin Büyükcoskun, produced by Arda Çiltepe(Vigo Film)from Turkey. Romanian post-production outfit Avanpost will provide the project with in-kind services up to €15,000, which may include financing strategy consulting, the project look-book as well as production/post-production for a proof of concept. The jury, comprised of Cristian Nicolescu (Avanpost), Jelena Mitrovic (Film House Bas Celik) and Oscar Alonso (Latido Films), said: “We are giving this award to the project ATHLETE because we were deeply moved by the portrait of a female character who makes sacrifices and struggles in a harsh society today, and in particular by the change she experiences after all the endeavours, resonating with all of us.”

For the first time this year, the MIDPOINT Consulting Awardwent to three cocoPITCH projects, each receiving an in-depth script consultancy in two parts, which started in Cottbus during the cocoLAB and will be continued in a second follow-up session online. The awarded projects: CONVENIENCE STORE from Russia (dir: Mikhail Borodin, prod: Artem Vassiliev/Metrafilms), focusing on modern slavery in today‘s Russia, NO LAND FOR ME from Israel (dir: Ram Nehari, prod: Yifat Prestelnik/Yifat Prestelnik Films), a coming-of-age story about a teenager growing up in Israel with his immigrant family from the former USSR, and WET MONDAY from Poland (dir: Justyna Mytnik, prod: Marta Gmosińska/Lava Films), a drama with elements of comedy and magical realism about sisterhood, trauma and nightmarish hares.

Sponsored by German post-production studio D-Facto Motion, the D-Facto Motion WIP Award of €35,000 in post-production services plus €5,000 for additional expenses to the work in progress BLINDFOLD by Taras Dron, produced by Valeria Sochyvets (Contemporary Ukrainian Cinema)fromUkraine. The project was selected by an expert jury consisting of Christine Dollhofer (Crossing Europe Film Festival), Valeska Neu (Films Boutique) as well as Robert Wunsch and Philipp Haenel of D-Facto Motion: „Our common choice for the D-Facto Motion WIP Award is a film with international potential that captured us with its unique story and strong female protagonist who is fighting against obstacles to gain her independence.“

Congratulations to all winners!