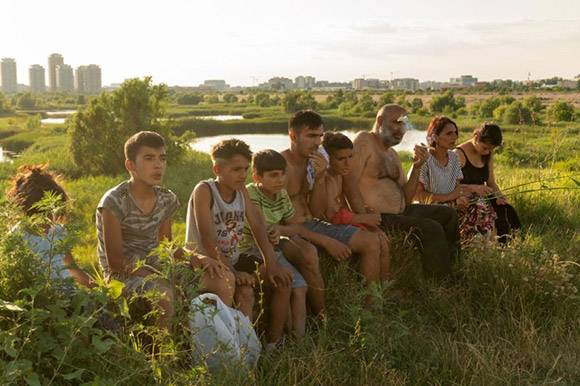 Acasa, My Home by Radu Ciorniciuc

dok.incubator is delighted to announce another 3 films developed in dok.incubator workshop are now competing in the World Cinema Documentary Competition at Sundance Film Festival! In the last 8 years of the workshop 12 films have already been selected for Sundance.

“Once Upon a Time in Venezuela” (VE/ UK/ BR), directed by Anabel Rodríguez, tells the story of once prosperous Venezuelan village which is now decaying and disintegrating and its inhabitants that have to deal with the gradual disappearance of their home as the lake - Latin America’s largest oil field - is slowly turning into a swamp. A small but prophetic reflection of Venezuela itself.

„The Earth is Blue as an Orange“ (UA/LT) a first time feature length film by Iryna Tsilyk, tells a story of a family coping with the daily trauma of living in the front-line war-zone of Donbas and facing down hardship with remarkable resilience. Anna and her children are making a film together about their life in the most surreal surroundings.

Radu Ciorniciuc’s debut “Acasa, My Home” (RO/ FI/ DE) follows the dramatic change in the life of Enache family which is chased out from the wilderness of the Bucharest’s Delta and forced to adapt to the big city. Fishing rods are replaced by smartphones, idle afternoons are now spent in classrooms, and family links are hard to maintain. With their roots in the wilderness, the nine children and their parents need to keep their family united in the concrete jungle.

Applications for the 2020 workshop are open now!

DEADLINE: 29th January
FIND OUT MORE
or meet us at Berlinale 21st – 24th of February.

Last modified on 2019-12-12
Tweet
More in this category: « Tallinn Black Nights Film Festival sets new records 22 projects selected for the 10th edition of the Trieste Co-Production Forum »
back to top