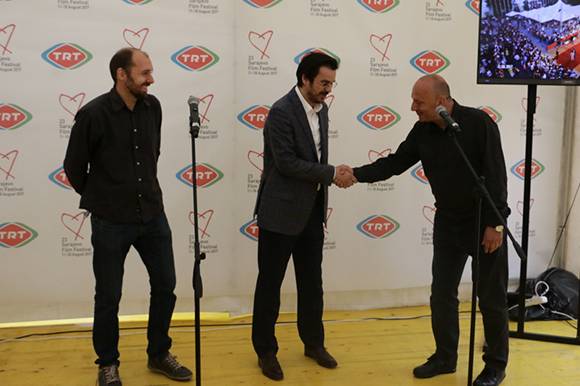 SARAJEVO: A Good Day’s Work by the Slovenian director Martin Turk will be the first project supported through Sarajevo City of Film for Global Screen.

Sarajevo City of Film for Global Screen (SCF GS) is a pilot project announced by Sarajevo Film Festival and TRT TV Movies in 2016. It has been envisioned as a feature film production scheme that would fully finance and cash flow the selected project with 200,000 EUR in cash, and also support the development process, supervise the production and help place the project on the international marketplace.

SCF GS aims at promoting the growing connection between the TV and feature-film markets, both artistically and in terms of production.

In order to apply the projects had to be micro-budget fiction films targeted at wider audiences and to originate from Bosnia and Herzegovina, Croatia, Kosovo, Macedonia, Montenegro, Serbia or Slovenia.

Ibrahim Eren, Director General of Turkish Radio Television, said: “The film industry is somehow an intersection between culture and economy and we see the partnership between TRT and SFF as a beginning with great potential. Through this project, we can support the creativity and film talent in the Balkans and at the same time bring the selected film to the audiences of one of the biggest TV networks in the region and Europe.”

A Good Day's Work is a character-driven social drama that tells the story of Andrej, an ordinary man struggling to find his place in life. His story reflects how the devaluation of human integrity is one of the most painful consequences of any crisis.

Consultations and development, which were planned to take place in the framework of the SCF GS project before the shooting, already took place and Turk should proceed to shoot in late October 2017.

The film will be shot in Sarajevo and the Croatian cinematographer Radislav Jovanov Gonzo is already attached to the project. Casting is currently underway. A Good Day’s Work should be finished by the 24th Sarajevo Film Festival.