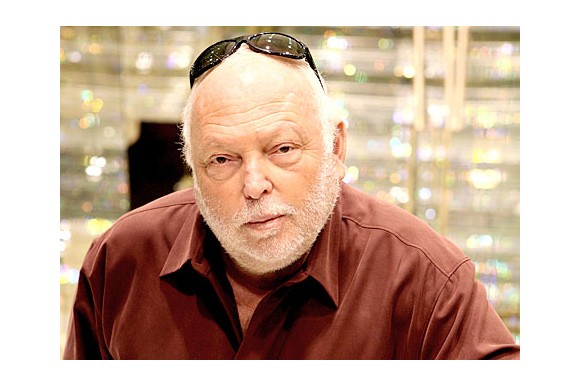 FNE at Cannes IFF 2012: FNE met up on the terrace of Carlton for an exclusive session with Hungarian Film Commissioner Andy Vajna together with Agnes Havas head of the Hungarian Film Fund and Csaba Bereczki head of international relations at the Fund.

You have now been in charge for one year and must be taking stock of what has been accomplished so far and what still needs to be done.

1 What was the most important development in the Hungary's film industry over the past year??

The second thing was coming up with a budget that was not dependent on the budget of each's year's cultural and parliamentary decisions. So we have managed to get the Number Six Lotto, 80% of the money that this Lotto earns automatically goes to the Hungarian Filmalap therefore we are not dependent on budgetary constraints, cut backs, these do not affect us. So we can really plan a future. We just have to promote everyone buying Lotto Number Six in Hungary.

So those are the two most important things

The third thing is that business as usual is back in Hungary. We have about 35 films in development, we have green-lighted four of them, one is in principal photography and we are looking to do at least two more films this year so I think the first year out we will do six films.

Hopefully we will go to ten next year and our goal is to continue doing that on a year by year basis.

2. When preparing the model for Hungarian film production and funding were there any other European models that influenced your decisions?

Well I looked at all the various European structures and I looked at as well at private industry structures and I tried to combine both things. I wanted to make sure that one we produce responsibly which means we are fully funded before any picture gets started. The second thing is the screen plays. Screen plays are the most important part of our decision when granting funding for a film project. In other words we are not just funding a project because a director had a good film last year so he automatically gets funding for one this year. If the script isn't right, it isn't right. We also work with the directors or the producers or the writers. We help them to develop their projects so that they become right, if it's a good idea but it isn't there yet, we'll assist them in getting it there. We care a lot about the screenplay. We have people that are experts on the committee that decides so we are not just superficially looking at projects and saying OK go make a movie. We are there to help. W are there to participate. We are there to make sure that we are making the movie that we started out to make.

3 How important are European coproductions for the development of Hungary's film industry and what opportunities do you see for cooperation with neighbouring countries in film production, education and distribution

Coproductions are very important for us. We want to make sure that the world is aware that we are alive and that we are making movies so coproductions are very much on the top of our list. As far as doing it with surrounding countries so we are doing it with whoever has treaties with us so of course this includes surrounding countries and some of them are from further away, from Canada for example. We are trying to put together all the possibilities to make sure that we get enough money to do the kinds of films that we want to do.

In fact I am meeting with a lot of the funds here in Cannes to make sure that we build much closer cooperation. Because I think that it's important for all of us to understand how we decide on the films we make and especially how we fund them. So I think those are two things that are very important.

The third thing is distribution. We have our own marketing team who are present in Cannes and we are actively marketing the movies that we make. It was important in the past now it has become essential for the future to make sure that we are not just a maker of films to put on the shelf but that we are making films for consumers. We have a group specializing in promotion and a group who specialize in marketing and that is also important because we don't have to depend on our partners to market a movie. We will be able to do so because we become a self operating unit on our own so we don't have to depend on anyone else to make these films or to sell them. It's really important.

4 What is the role of film in Hungary's cultural identity

I think it's very important to have cultural content for these films but it also must tell a story. Even though the cultural identity needs to be present we still need to attract the audience. Because it's great to have all this cultural identity but if nobody sees your movie what good is it?? You need to carefully combine these things in order to make sure that we have an audience, we serve our culture and then that we make movies that also entertain because that's what it's really all about.

5 How does the recognition of your country's film internationally promote not only Hungary's film but also Hungary as a country???

Well absolutely, I mean film tourism a very interesting thing. We've just had important meetings with the tourist boards because not only are we making Hungarian sponsored films we are also servicing of other films, American and foreign films that are shooting in Hungary and they become real highlights for the country. These productions are also a training programme for the people that are working in the film industry in Hungary because they get to work with other people and these people some of the best in the world. Because of all the American films that are coming to Hungary they are really getting great training. Those films that are shot in Hungary show Hungary. So it's an important thing. I remember when I shot Evita in Hungary they used to have tours showing where this was shot and that was shot and I think now with Die Hard 5 and the third season of the Borgias TV series and several other movies that are coming and are shooting in Hungary I think Hungary will become a very important location. It isn't over used and it has very unique features. It can substitute for Paris, London, Germany, the Eastern European countries, Russia, so I think we are very fortunate in this and that it will give Hungary a much stronger identity.

6 Looking forward where do you hope to see Hungary's film industry in five year's time? And what needs to be done to get there??

Well I think it's very important for us to improve the strength of our screen plays, our writing. I think it's extremely important that we really care about the audience and we want to talk to our audience. We need to learn to do that and we hope to do that in some fashion so we are very strong and very positive and pushing and writers because that is the base of any movie so that is where we need to strengthen ourselves.

And where we would like to be five years from now is winning lots of prizes at festivals, winning lots of awards, but more importantly having successes at the theatrical level as well. That the people enjoy the Hungarian offerings, we want to make sure that they get to know our country. And know our people through a fun experience and that's what we are hoping to achieve.