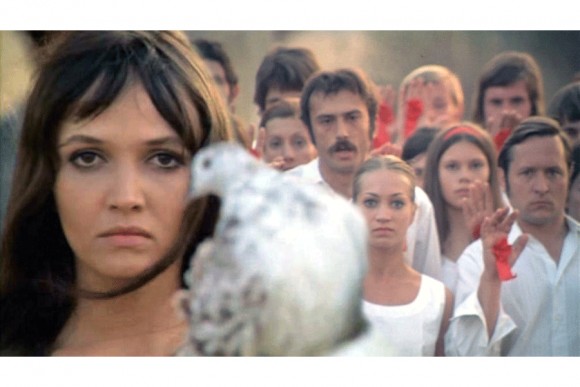 Jancsó was one of the most recognised and respected artists in Hungarian film history. In the late 60s and 70s he was ranked by the critics as high as Ingmar Bergman and Michelangelo Antonioni and was among the greatest directors of his age.

Jancsó (born in 1921), best known for his long shots, unconventional narrative and perfectly coreographed, balet-like scenes, received international attention first with his 1966 film, The Round-Up (Szegénylegények). Its strong symbolism and political allusions also appeared in Jancsó’s next films (In My Way Home, The Red and White). His greatest success was the Best Director award at Cannes in 1972 with Red Psalm (Még kér a nép).

In the late 70s Jancsó’s films became choreographically more elaborate and even more allegorical, but these works were less respected by the audience. In the 80s some critics accused him of repeating visual and thematic elements from his previous works.

After an almost ten-year break he returned to the screen with The Lord’s Lantern in Budapest (Nekem lámpást adott kezembe az Úr Pesten) in 1999. The movie’s two central figures, two gravediggers who try to understand the new post-communist world around them, and a new satyrical approach were rewarded by the audience and helped to revive Jancsó’s career. The movie became the first from a series of films using the same figures and the same witty, self-reflective voice.

He was awarded the prestigious Kossuth Prize in Hungary twice (1973, 2006), and he received awards for his oeuvre in1979 and 1990 at Cannes and Venice respectively.