PRODUCTION: Viesturs Kairšs’ City on the River in Postproduction Featured 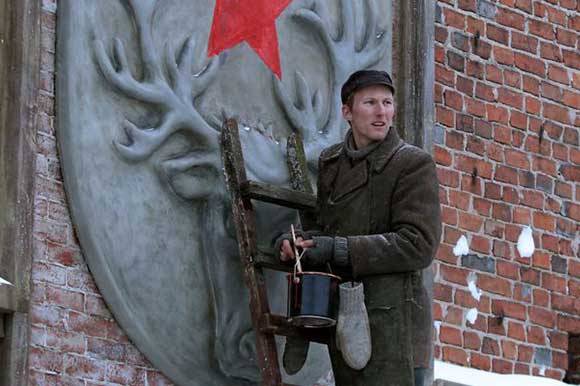 City on the River by Viestur Kairish photo: 8Heads Productions

RIGA: Viesturs Kairišs' City on the River / Pilsēta pie upes is in post-production, after the completion of the last shooting period in April 2019. Filming lasted 37 days. Most of the location shooting took place in the Eastern part of Latvia (Latgale), at the Baltic Sea near Rīga and in Lithuania near the Latvian border. The film is produced by Ego Media and it is expected to be released in early 2020.

The film takes place over the period from 1939 to the end of World War II. The main character is a young man Ansis (Dāvis Suharevskis), who works as a sign-painter in a small town. Over the tumultuous years of power change in the country (after the authoritarian regime comes the first Soviet occupation, then German occupation, again followed by Soviet rule) he is forced to mature and stand on his own, both in political events and in his private life. Ansis is torn between two women: a Jewish girl Zisla (Brigita Cmuntová) and the daughter of a local drugstore owner Naiga (Agnese Cīrule). The film is based on the novel by Latvian author Gunārs Janovskis, who went into exile at the end of WWII.

The film includes an international cast of professional and non-professional actors. It is the first acting experience for Suharevskis, but he is supported by professionally renowned actors Brigita Cmuntová, Agnese Cīrule (Exiled / Pelnu sanatorija and the TV series The Red Forest / Sarkanais mežs), Gundars Āboliņš and Juozas Budraitis. The production includes a large number of extras, who were locally hired of Eastern Latvia. The film’s cinematographer is Gints Bērziņš (Chronicles of Melanie / Melānijas hronika, The Shoe / Kurpe).

City on the River is the fourth full-length fiction film of Kairišs. The first two films were set in contemporary Latvia, but his third feature Chronicles of Melanie was a historical drama about the exile to Siberia of the Latvian writer Melānija Vanaga. The film starred Swiss actress Sabine Timoteo in the title role. It received the best cinematography award at the Black Nights Film Festival (2016), it was named the best film of the year at the National Film Awards, and received the Best Director, Best Actress, Best Set Design and Best Costume Design awards.

City on the River is produced by Guntis Trekteris at Ego Media (Latvia), in coproduction with 8Heads Productions (Czech Republic) and Artbox (Lithuania). The project is supported by the film institutions in all three coproduction countries, with the largest financing amount from the National Film Centre of Latvia, 700,000 EUR. The estimated budget is 1.5 million EUR.

The post-production of the film will be done in Prague by Magic Lab and Sleepwalker.

The expected release date is January 2020. The distribution in the Baltic countries will be handled by ACME Film.