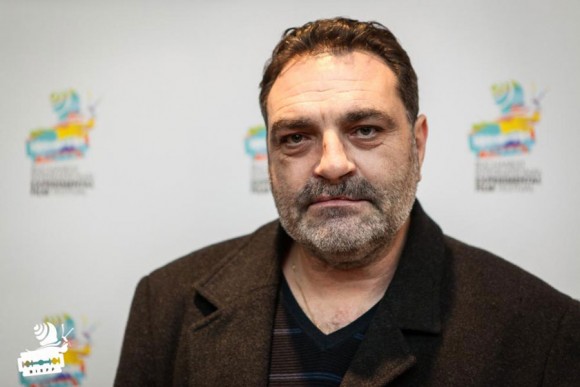 FNE spoke with Laurentiu Damian about the changes that he intends to make at the Romanian Filmmakers Union and his vision for a new Romanian National Film Institute.

FNE: You took over the Romanian Filmmakers Union (UCIN) in 2013, when the institution was celebrating its 50the anniversary. What were the first things that you wanted to change?
Laurenţiu Damian: I found an institution which was asleep and which was protecting the filmmakers only on paper. I don't intend to talk about "the difficult heritage" - I wasn't interested in all that. I was part of this numbness because I had no choice. So the first thing that I said was: "We need young people!" Secondly, we need to encourage festivals, and we need to do it selectively since festivals have appeared in Romania like mushrooms after the rain, and many of them in my opinion have no reason to exist. Last year UCIN supported approximately 15 festivals, almost as much as the National Centre for Cinema (CNC).

FNE: Through which funds are you doing that?
L.D.: Through the Cinema Revenue Stamp (Timbrul cinematografic), which also helped us to support the critics, directors and actors' participation in foreign festivals but with less money than 50 EUR per diem. We also managed to start publishing the magazine Film, which is now in its second issue, and we also opened an online film magazine called All about Romanian Cinema which is starting to have more and more readers.

We also renovated our institution, which also hosts Cinema Studio, and we managed to transform the Marble Hall behind the big screening hall, which used to look like a mausoleum, into an exhibition area where painters, artists and photographers can show their work even if they are not members of the National Alliance of Creators Unions (ANUC) as UCIN is. We even took the members of UCIN out of their institution to Ateneul Român for the 50 year anniversary of the union.

FNE: UCIN has a new statute. What are the changes?
L.D.: The statute was approved in court a few days ago. The big novelty is that the Romanian Filmmakers Union doesn't comprise 14 associations any longer; only eight. We put together a few associations that were functioning as sections. The big improvement is the new Authors' Association, which is part of UCIN. Until now we couldn't negotiate with any foreign institution if we didn't have an association or union because the so called "union" was not a proper union, and the associations were in fact union guilds without actually being unions.

So we put together the directors' association, the screenwriters' association and the composers' association and we created the authors' association, which also has a technical section for assistant directors, script supervisors, etc. The critics and film historians have other associations, while the producers, promoters and film distributors constitute another one. The fact is that people who are effectively producing in Romania are not members of UCIN; we stayed with the delegate producers from the communist era, but there is a structure to start with.

For example, Ada Solomon joined us and Tudor Giurgiu will do it soon - I mean people with companies, people who are producing, promoting and distributing films. We have encouraged them; for example, we opened the doors for festivals and gave them not only the Cinema Studio and some money but also my office for the jury to deliberate in.

We didn't perform miracles; it was a logical thing to do. After all, many of them were my students at the National University of Theatre and Film I.L. Caragiale. Some of them still remember that, others not any more, but when they were my students I gave them the freedom to do things, to aspire, to make mistakes and to do things all over again.

FNE: Do you have other ways to lure young members?
L.D.: They say it very clearly, that they are part of another kind of cinema, that the union is old and that their members are actually coming for that half of the pension they receive legally from the state as members of a creative guild or for that merit payment. They gave me sad feedback when they didn't show up at the 50th anniversary of UCIN. From that whole generation only Ada Solomon came.

I talked to her; there are a few things to be considered but I had to wait for the statute to be approved because it will make a team out of the president and the steering committee, which was cut from 39 people to nine. The new statute also narrows the council from 100 to 40 members.

We also opened a publishing house and right now two theory books about screenwriting by the professor Dumitru Carabăţ are being translated into English.

We have many possibilities. If we can't support film production, we can anticipate it through scripts or synopses that can be made with our support, scholarships for students and young people or workshops with foreign guests who can be invited to teach for example screenwriting not only at the UNATC. And all these can make young people come to us because nowadays people are not gathering around associations, but around projects.

FNE: Where you see the Romanian Filmmakers Union five years from now?
L.D.: In five years the situation will be more clear than today. Now I am caught in the middle between a faded world that can hardly conceive it and a world that is pretty aggressive and eager to impose itself and I have to keep the balance. It is difficult.

You can't tell an 80-year-old guy, "You didn't represent a thing for the Romanian cinema," but on the other hand that man cannot be placed in any relationship with Corneliu Porumboiu or Cristian Mungiu, who says to me, "What's the use of a 50 year anniversary at the Ateneul Roman? Why this glitter? We'd better do something more concrete."

So I am trying to dance around this: I am taking a bow, my partner takes a bow, and we both try to do something. I don't want to turn UCIN into a union, but I do want to modify this structure, which is a socialist one, very old fashioned and more akin to the old cinema schools.

FNE: What is the news on the National Film Institute, which was approved by a government resolution in 2013? This project is yours.
L.D.: No news yet. The institute was approved and the statute has to be discussed but the discussions are stalled because the institute has no home. There are discussions over the building that once was occupied by the Sahia Studio.

Another thing that has to be clarified is the relationship with the National Centre for Cinema (CNC). In my vision, the National Film Institute will take over a large amount of the CNC functions, but it will not take over it completely. The institute will elaborate a strategy, it will preserve the film archives, it will edit magazines, it will organise a national or an international film festival, and it will promote Romanian film abroad.

FNE: Not everybody is happy about the idea of the institute working as production company.
L.D.: A film institute cannot be a producer but it can indicate some directions. For example, it can support experimental cinema for some time, short films and animated films later, or it can help the development of specific themes.

FNE: And how would this National Film Institute be financed?
L.D.: That's also an issue because the institute would also take over the financing of CNC, and CNC would become a "bank" with a much smaller staff. Obviously, CNC doesn't want that.

FNE: When will the Filmmakers Union give out its annual awards? Are there any changes in the regulations?
L.D: The Filmmakers Union prizes for 2013 will be awarded after 20 March. There will be a jury composed of eight members, delegated by each association. I will move gradually, in one or two years, to something that will infuriate many members: I want critics to decide the awards for domestic film production. That's their job. But I have to take small steps, because egos are strong.