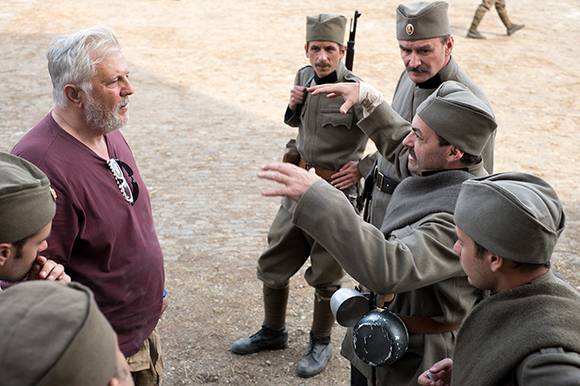 Predrag Antonijević on the set of Soldier's Lullaby

Stevan Jakovljević, a WWI veteran who fought for the Serbian army, arrives at the celebration of the 20th anniversary of the end of the war and the opening of an ossuary in the village where he used to be stationed with his first company. Back then, Stevan had been reassigned to another unit, so one of the reasons he came to the opening of the ossuary is to find out what had happened to his fellow soldiers, especially to his immediate superior, Second Lieutenant Aleksandar.

Shooting is currently taking place in Bela Crkva, a picturesque small town in northeast Serbia. Shooting started on 5 September 2017 and is expected to end by mid-November 2017. Approximately 95% of the film is planned to be shot outdoors.

Predrag Antonijević and Nataša Drakulić also collaborated on the first season of My Father’s Killers / Ubice moga oca, a 10-episode crime drama directed by Predrag Antonijević, which was shot and broadcast on Radio Television of Serbia (RTS) in 2016, becoming the most popular TV show of the season.

In the last 27 years, Predrag Antonijević made several films in the U.S  including Savior (1998), shot in former Yugoslavia, produced by Oliver Stone and starring Dennis Quaid, Stellan Skarsgård and Nastassja Kinski.

Film Danas
This email address is being protected from spambots. You need JavaScript enabled to view it.

Komuna
www.komuna.com
This email address is being protected from spambots. You need JavaScript enabled to view it.

Contrast Studios
www.contraststudios.rs
This email address is being protected from spambots. You need JavaScript enabled to view it.

Direct Media
www.directmedia.rs
This email address is being protected from spambots. You need JavaScript enabled to view it.