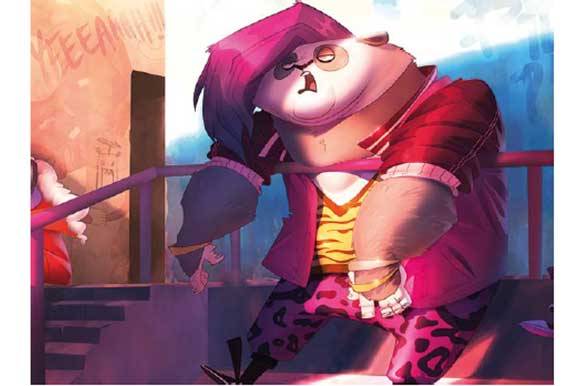 TREBON: Slovakia returns to the newly expanded CEE Animation Forum, running through 8 May 2019, with the animated TV series Street Pack, which tackles a new target audience in Slovakia: teenagers.

Building on the track record of five years of animation production aimed at Slovak teens through the company’s online Lokal TV makes this look like a smart move for producer/director Matej Holub of Inout Studio, who presented the project together with art director Klaudia Bulantova.

The main characters are a group of animals that live in the city and dream of having their own band. Their struggles involve an evil music magnate and overcoming the disapproval of their parents

The series will have 8 episodes of 26 minutes each, and a budget of around 50,000 EUR per episode and an overall budget of around 500,000 EUR. The story line unfolds across a three-act dramatic structure, with each “act” lasting two or three episodes, and with each of the main characters completing their arc within the series. Bulantova’s style, using 2D vector animation, will be “fresh, colorful and juicy” in contrast to the gritty background of the characters’ urban environment, filled with graffiti-ridden ugly streets and the night life of music clubs. The end result will combine musical, drama and comedy genres.

Inout Studios has created 18 online animated series with over 120 m views for its website Lokal TV. The online station turned out weekly content based on current events, proving to be ahead of its time.

“We really want to push this into the international arena,” Bulantova told FNE.

Holub added, “We’re bringing together the expertise of the gaming and animation industries in Slovakia,” both of which have a strong reputation.

The series in still in the early stage, with the team looking for screenwriters, musicians and international coproducers. The creators are also looking ahead to the franchise potential of the series, with the next group of episodes focusing on the world of dance.