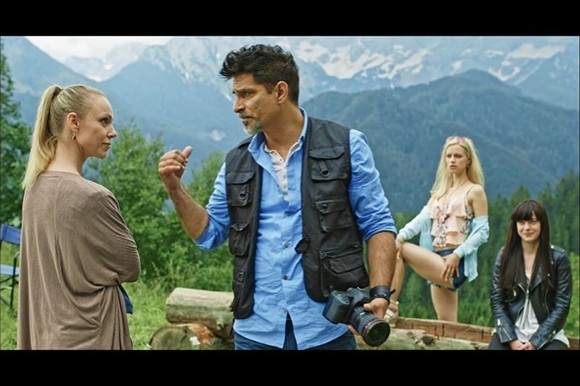 Slovenia’s film production has remained fairly stable in 2015, although the difficult economic situation has not improved. Changes in the distribution sector are expected to have a significant positive impact on admissions in future. In spite of an overall record number of film projects submitted for the Slovenian Film Festival 2015, the number of completed domestic feature films has remained the same.

Digitalisation is almost completed and a new film law is pending. Slovenian producers continue to focus on participating in international productions as coproducers and minority coproducers, especially for films from the ex-Yugoslavia countries.

Film production is comparable to 2014 in terms of completed projects, but due to economic problems many projects have been delayed as in 2013.

The documentaries are: Home by Metod Pevec, produced by Vertigo; Partisan Priest by Bojan Labovič, produced by Studio Legen.

In beginning of 2016 in the projects slated to go into production are: Slovenia, Australia and Tomorrow The World by Marko Naberšnik, produced by Perfo Production; Ana by Igor Šmid, produced by Arkadena, Erased by Miha Mazzini, produced by Gustav Film, Yellow Boogie by Karpo Godina, produced by Nora Production Gorup and Stories from Chestnut Woods by Gregor Božič, produced by Nosorogi.

In the last 2 years the production of animated films increased significantly. Series of short animated films like Koyaa by Kolja Saksida, produced by ZVVIKS, Princ Kikido by Gregor Mastnak, produced by Ozor as well as new author films by Špela Čadež, Leon Vidmar and Dušan Kastelic are highly anticipated.

The number of titles from the US and from European/other countries are still equally balanced on the market, with the share of domestic titles slightly dropping.

The digitalisation process across the country has been mainly completed in most of the cinemas still operating. According to official statistics 84 out of 106 cinemas have been successfully digitalised.

Most of the Slovenian attendance is shared between two major cineplex chains. In 2014 Cineplexx covered 43.41% of total admissions, Kolosej kinematografi 36,76%, Kinodvor 5,90%, Cankarjev dom 1,73% and others 12,20%. The new player on the exhibition map is Kino Bežigrad, a one-screen cinema in the center of Ljubljana.

Two comedies topped the box office in 2014: the animated film Rio 2 with 344,328 EUR gross and 66,142 admissions, followed by Dumb and Dumber Two with 313,819 EUR gross and 63,877 admissions. The third in line is Wolf of Wall Street with 365,553 EUR gross and 62,744 admissions. Top Ten includes other three animated films (Maya the Bee Movie, How to Train Your Dragon 2 and Frozen), the final chapter of Hobbit: Battle of the Five Armies and two young-audience comedies (Neighbors and 22 Jump Street).

In 2014 the interest in new domestic titles was low. The top Slovenian movie was Changing Emma (Almedia) with 29,444 admissions and 117,572 gross, closely followed by Panic (RTV Slovenija) with 21,746 admissions. The other three top titles were Sailing to Paradise (Sever&Sever d.o.o.) with 4,782 admissions, The Woods are Still Green an Austrian/Slovenian coproduction, (Artdeluxe, Perfo) with 3,902 admissions and Inferno (Forum Ljubljana) with 3,096 admissions. However, two domestic top titles from 2014 were still highly ranked in the chart, Going Our Way 2 by Vertigo/Emotionfilm with additional 13,125 admissions (in total 128,270) and Class Enemy (Triglav Film) with 12,266 admissions (in total 57,809).

The main film institution in Slovenia is the Slovenian Film Centre (SFC), a public agency established in 2011 when it replaced the Slovenian Film Fund. Its goal is to encourage creativity by providing suitable conditions for audiovisual activities.

The Slovenian Film Centre supports national film production, postproduction, distribution and film festivals. It is the main source of film funding covering production, project development, script development and educational activities. Since its launch, SFC has been involved in the production of 80% of domestic films with average funding support of over 50% per project.

The film industry in Slovenia is generally dependent on the Slovenian Film Centre. In theory, its funding sources should be varied and come from the state budget, the agency’s own income, collaboration with international organizations, donations and sponsorships; but in practice the majority of its funding is in the form of a subsidy from the Ministry of Culture with the amount depending on the annual budget of the country, which makes the agency highly dependent on the current political and economic situation.

Four public tenders for film production were announced in 2015, and two of them were completed by the end of 2015. The other two - for short, medium and feature films production, and for debut features production, are expected to be concluded in the first third of 2016.

Other sources of funding originate from coproductions, services backed by the state provided by FS Viba film studio in form of technical assistance, international film funds and institutions and foreign taxes. The main business activity of Viba film is to maintain the fulfillment of the Slovenian national film programme. Technical completion covers production (sound and image recording and processing) of feature films and short films, documentaries and animated films of all genres.

In the last few years according to the Law on Slovenian Film Centre public broadcaster RTV Slovenia is obliged to invest financial sources into cinematographic production of independent producers. Approximately 1.7 m EUR annually has been invested in each of last three years into production of shorts, animation, documentaries and feature films. The most anticipated film production in 2015 was The Beat Of Love by Boris Petković, produced by Gustav film with many titles in production.

TV market is in a period of transition. Leading commercial TV Pro plus with its five channels (POP TV, KANAL A, KINO, BRIO and OTO) is losing its dominant position to Planet TV.

Planet TV is continues to strengthen its position on the market in competition with the leading commercial TV channel Pro plus, while the national television RTV Slovenija is losing a part of its share in the domestic market.

Other key players are RTV Slovenija national television with three channels and TV3 Medias, followed by the international Fox Group.