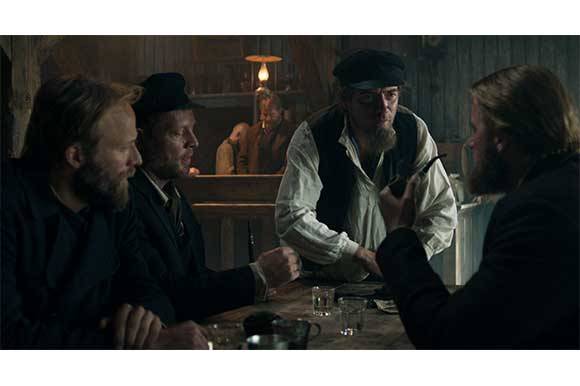 A special committee led by Estonian Film Institute (EFI) has voted for submitting a national epic Truth and Justice, adapted and directed by Tanel Toom, as the candidate for the Academy Award for Best International Feature Film. In addition, for the first time, Estonia is also represented by a documentary feature due to the automatic submission right given by the Karlovy Vary festival win for Ksenia Okhapkina’s Immortal.

„No doubt, the selection process was characterised by the consideration of three feature films produced under the auspices of the special programme of Estonia 100,“ Edith Sepp, Head of EFI, said, chairing the independent committee which selected the winner out of seven candidates. „It should be noted, though, that being part of the programme didn’t give any film a handicap. Rather, it was symbolic, in a way, that the voice of people was indirectly responsible for choosing which film should be representing Estonia. Meaning, that one of the most influential arguments was domestic box office success.“

The committee comprised of film journalist Hendrik Alla, actress and director Maria Avdjushko, producer Evelin Penttilä, distributor Mati Sepping, film critic and head of Black Nights Film Festival Tiina Lokk, and director Liina Trishkina-Vanhatalo, whose debut feature represented Estonia at the Oscars-race last year, voted for the film produced by Allfilm serving also as a full feature debut for Tanel Toom. By the end of July, Truth and Justice had 265,866 cinemagoers tallied, which makes it the most watched theatrically released film in Estonia after the country regained its independence from the Soviet Union in 1991.

„It’s a great honour to be chosen to represent Estonia with a film based on a masterpiece by Tammsaare. It’s a recognition to all of the filmmakers involved and their effort of bringing the story to life – once more, thank you all,“ Toom said.

According to the committee, Truth and Justice proved with its record-breaking viewership that the film is important for Estonians because it touches us deeply. Regarding the positive aspects of the film, the committee mentioned a well-adapted screenplay that retains the tension throughout, but also a beautiful visual style, characters of biblical stature, and a solid ensemble cast. „We liked that the film was emotionally charged and it wasn’t being downplayed into a farce with a jokey style or irony,“ the committee concluded. Four out of seven committee members voted for Truth and Justice whereas three opted for Scandinavian Silence.

The story of Truth and Justice, adapted from the first book of the titular series of novels by Anton Hansen Tammsaare, follows the uncompromising new owner of the Robber’s Rise who must battle with hard work, his spiteful neighbour and his own beliefs in order to transform the poor land into a flourishing farm of his dreams, and bring truth and justice to this godforsaken place.

For the first time this year, Estonia sees two films in competition at the Oscars-race. The other being a documentary feature Immortal by Ksenia Okhapkina, a joint production between Estonia and Latvia. The delegate producer is a documentary production house Vesilind. In July, Immortal won the Grand Prix for the Best Documentary at Karlovy Vary International Film Festival which gives the film a right to be submitted for consideration for Oscars without a vote by a national committee.

Immortal, shot on location in an industrial city of Russia’s Far North, explores to understand what it is that makes people to voluntarily disavow their personality and become a national resource. Can a person be free at all in a society where complex and shady state structures control their thoughts since early childhood?

Tue Steen Müller, the expert on European documentary films, considered Immortal to be an interpretation of human life through sound and image and editing and point of view. „It is seldom that I see a film that so precisely invites you into a world conveyed via symbols and sequences that has a flow of scary beauty that hits your eyes,“ Müller wrote in his blog.

Riho Västrik, producer of Immortal, is happy with the film’s success. „Everything has happened so fast. We had the premiere merely a month and a half ago, recent weeks have seen us in active contact with festivals and now with the Academy. Nothing to complain about,“ Västrik said.

Additional information:
Edith Sepp
Estonian Film Institute
This email address is being protected from spambots. You need JavaScript enabled to view it.