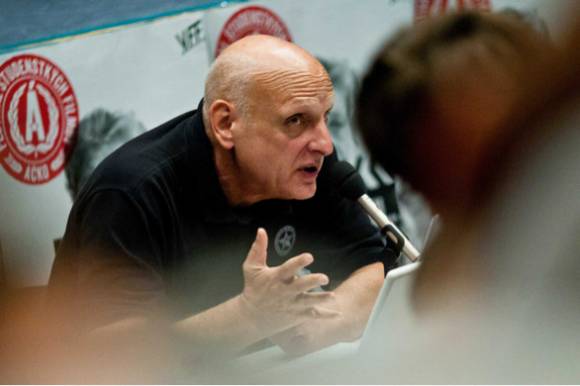 Meet the educational and networking platform entitled Visegrad Film Forum, set in the cosy central Europe, Bratislava, Slovakia. The 9th edition of the event is the right place for filmmakers looking for new international contacts and eager to know more about the filmmaking process from world-known professionals. Packaged in the informal atmosphere.

Visegrad Film Forum will host top-notch filmmakers from all over the world for the ninth time. From the 10th to the 14th of March 2020 they will introduce themselves to the public via lectures and case studies of their films. One of the first confirmed guest speaker is American producer and scriptwriter Jim Stark.

The Role of the Producer in Independent Filmmaking

The producer and scriptwriter Jim Stark has helped many of the landmark indie US and European films to get made and get seen, including collaboration with Jim Jarmusch, SzabolcsHajdu or CorneliuPorumboiu. “People think filmmaking is all about the weeks that a film is shooting. In fact, from first idea to release online or home video, an independent producer like me works on a film for at least three or four years, and I have done films that took a decade to finish.”says Jim Stark

Jim Stark first came into contact with the film world in 1983. He helped to finance and produce second film by Jim JarmuschStranger Than Paradise. Stark produced for him also Down by Law, Mystery Train, Night on Earth and two short Coffee and Cigarettes films.

Jim Stark was on the jury of Romania’s Transilvanian Film Festival when he met SzabolcsHajdu, who approached him. They started to collaborate on Mirage - Hungarian-Slovak western which takes place on the Great Hungarian Plain with a story that is characteristic of the genre, however unique in its Eastern European interpretation.

Recently has aslo worked as an associate producer on many films like Foxtrot by Samuel Maoz which won Silver Lion in Venice IFF, Our Time by Carlos Reygadas or La Gomera by CorneliuPorumboiu which was nominated to Palme d'Or in Cannes.

Get to know Visegrad Film Forum

VFF is an international educational and networking event facilitating contact between talented young film professionals from the neighbouring European countries and internationally recognised and appreciated film creators.Thanks to a series of master classes, case studies, discussions, film screenings and practical workshops with respected filmprofessionals, filmmakers get a unique opportunity to gain valuable theoreticaland practical knowledge for their work in future.

The beneficial value is a friendly and informal atmosphere, where all the discussions and networking are basically going on during the off programme. All participants have also chance of late night networking at parties organized by VFF every night during the event.

as well as prize winner from Cannes and Venice, Sergei Loznitsa (Trial) and Colin Arthur (NeverEnding Story, 2001: Space Odyssey) or LudovicaFerrario (The Young Pope, The Great Beauty) came to share their knowledge and experience.

Are you an Early Bird?

Early bird accreditations valued at 20 EUR (10 EUR for students) are available only until 10.1.2019, after that the price goes up.