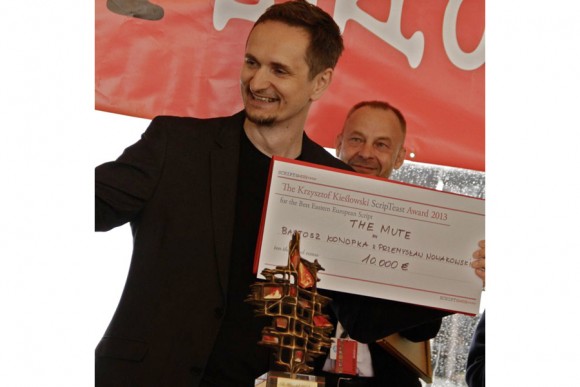 Writer / director Bartek Konopka (Poland) won the Krzysztof Kieslowski Award at the 2012-2013 edition of ScripTeast with the script The Mute written together with Przemysłav Nowakowski.

​Bartek Konopka: The intense feeling that we, filmmakers from the Central and Eastern Europe create a community of similar experience, sensitivity, bad and good vibes. We try to be close to individual fate, we want to understand characters, cross fingers for their fight. That gives me great support meaning I’m not alone, so many people feel the same. The organizers of ScripTeast create this atmosphere and bond us all together, this is something spiritual, not measurable with money or words.

Bartek Konopka: It was important in developing the script, the hard work, lot of precise advice from different points of view. But it was also important in a sense that I have a group of supporters, who try to understand my point of view, believe in my story and my talent, help me deliver it. I miss each meeting because it was not only script improvement, but also sharing thoughts and feelings with friends, in the good company of participants, tutors and organizers.

Bartek Konopka: Be more brave and sincere! Brave in developing a strange atmosphere, lack of characters' background, tension around the story since the beginning, get rid of some information, play with the curiosity of the viewers, focus on characters' behaviour, their will to survive, not their statements. To be sincere in using my own thoughts, fears, needs, hopes, and to project them on characters, let them live in my heart.

FNE: In which ways ScripTeast is different from other script development workshops?

Bartek Konopka: It's not so official, deadly organized and scheduled, and also cold and indifferent because of that. ScripTeast tries to fit participants' expectations, puts a lot of effort to befriend them with tutors. ​Unofficial meetings and dinners have the same importance as work in groups.

Bartek Konopka: On The Mute! Finally we have a chance to make it. We are shooting in autumn 2016, we are very much devoted and motivated to make it this year, on whichever budget, and we are open to many possibilities. ​The core of the story is strong and we have to keep this, despite financing or any outside pressure obstacles.