SOFIA: FNE spoke with Irina Kanousheva, acting director of the Bulgarian National Film Center (www.nfc.bg) on the challenges facing the film industry in Bulgaria and how Bulgarian and EU policies on film interact in one of the EU’s newest member s 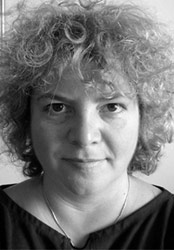 FNE: You have been acting director of the Bulgarian National Film Center for nearly two years. You were nominated in a time of exceptional difficulties, when a lot of filmmakers were in out on the street protesting during the so called “Cinema Revolution” in Bulgaria. What has changed since then?

KANOUSHEVA: As I have been absorbed in the daily stress, I have not had the time to stop, to look back and to analyze what exactly has changed. But in answer to your question, I think it is important to underline, that for me there was a period of adaptation to the work. On the other hand, the situation was very tense and the expectations awaiting me were pretty high.

I do not know if I've met them. Probably there are people who consider that what I did was good, while other people do not think so. My main intention was to calm things, to return the process to normal and step by step to start working on the necessary legal changes. As we know, next year the new Cinema Communication of the European Commission will become official. We need to bring our legislation in line, namely the Film Industry Act and then the Administrative Regulations of the NFC.

But in the meantime, the film production process should not stop. Since I became the acting director, we already have held two grants sessions and we are about to have a third. There are problems both in the evaluation system and the choice of the people evaluating the projects. Next year many changes should be applied. The new director, whoever he might be, will have a lot to do.

FNE: Where do you see the changes in the Law according to the upcoming Cinema Communication?

KANOUSHEVA: The new Communication will become official in June 2013. There are lots of things that need to be changed in Bulgaria. Our legislation must be absolutely consistent with the Cinema Communication.

FNE: What is not in line now?

KANOUSHEVA: For example, the ceilings of the low budget films. But I do not want to go into details that the Commission adopted, although they were not compliant at the moment.

FNE: What is the impact of the Decision of the European Commission on the Bulgarian state aid for film and the film support scheme?

KANOUSHEVA: The Decision of the European Commission assumes that our way of allocating public money for film is not in contradiction with the European state aid legal requirements. I think that the Decision brought some relief in our community because there were major concerns among some people that we would never get the decision.

FNE: Why was this process go so slow?

KANOUSHEVA: First, Bulgaria submitted the notification only in 2010. At the start of our EU membership, there was a dispute whether film aid constitute state aid or not. Previous authorities decided they did not.

KANOUSHEVA: Bulgarian authorities. So far, in 2010 we asked for an official notification of our state aid.

FNE: Is it clear now in Bulgaria that any public support of this nature is treated as state aid?

KANOUSHEVA: Yes, in the beginning some people tried to avoid that. The decision period was long, from 2010 to 2012, over two years.

KANOUSHEVA: Yes, since December 2010, so far. And all this time we fought to succeed. We attracted legal and economic experts in state aid and in communication with the European Commission. We had to clarify different points in our scheme. They asked us specific questions, we gave examples, explanations. The fact that we acknowledged that our scheme was continuing to operate, although no decision of the Commission was delivered, made the process enter into the so-called “not notified aids” procedure.

The Commission's commitment to provide a decision within two months dropped. So the process was extended to the fully clarification of all issues. So far, Bulgaria has a recognized government scheme of public funding for film. However, any future change in it must pass through the appropriate notification.

FNE: What do you think should happen so that one day Bulgaria establishes a film fund? Every previous government has promised such a fund.

KANOUSHEVA: We had such promises from members of the actual government in the first days after the so-called revolution in cinema, in December 2010, when I took the job. We had a meeting in the Council of Ministers on the issue of the fund and the other financial sources for film. There was a meeting with the Prime Minister Boyko Borisov and the Finance Minister Simeon Djankov.

FNE: Why is this issue always downgraded?

KANOUSHEVA: Probably because there are interests, especially economic. Because sometimes there is no political will. The two things could probably be tied.

FNE: Do you know about the proposal that 25% of the VAT from audiovisual sector activities be set aside in a future fund?

KANOUSHEVA: No, I am not aware of it. It would be good to do that. I really hope that one day Bulgaria will establish a film fund because this would free the Film Center from enormous tension.

FNE: The number of films receiving support was also reduced. Only one feature was supported with production money at the last session.

KANOUSHEVA: Well, there were three debuts as well.

FNE: Do you think this is enough?

KANOUSHEVA: The number of supported projects depends on the money. We cannot support projects that are not financially assured.

FNE: We are talking about the general question that the Bulgarian cinema is constantly gasping creative energy...

KANOUSHEVA: Before I became director of the Film Center, due to insufficient funding all selective sessions were cancelled. This created a backlogof projects that had no place to apply. Then, when I authorized the sessions they were overloaded with projects. Committee members who read all the applicant projects said that many were of very good quality.

FNE: But the Film Industry Act is regularly violated.

KANOUSHEVA : It is not applied one hundred percent, it's true. Last year's budget was 5mEuros, this year it is6mand next year, I hear it could raise up to 7m or even 7.5 m Euros. I do not know if this is really going to happen, but it sounds good,even, if this amount is still not one hundred percent of the Law.

FNE: Any Member State of the European Union is seeking ways to establish a so-called fan of financial sources. Bulgaria has only one source - the National Film Center. How should the state regulate the relations with the broadcasters? Even the National Television somehow concentrates on things that mainly interest it. There is not enough of a relationship with the state aid allocated by the national film institution.

KANOUSHEVA: When producing series TV channels say they are making films. This is not bad because the TV channels are powerful. But it is not quite true.

KANOUSHEVA : Yes, in addition, they open the opportunity for people to meet new actors and faces. This way they are helping the promotion of cinema, because the same actors appear in the films. But television should be more directly involved in the co-financing of the projects we select. The law does not allow us to deliver to a film more than eighty percent of the budget. There are very few sources through which the producers can close their budgets.

FNE: This problem is a still not solved.

KANOUSHEVA : Yes, it should be resolved. In addition, if applicable, what is written in the European Commission Decision on the notification, the states do not have the right to give more than fifty percent of the budget. Only in the case of a low budget a film can it be supported up to eighty percent. So, there must be other sources of funding. One cannot rely on private sponsors.

FNE: In this part of our law is pretty archaic ...

KANOUSHEVA: It is archaic in many other parts too, there are many inaccuracies too.

FNE: Last year you were at the heart of the great enthusiasm with which the National Film Center organized the festival "Golden Rose", that celebrated three anniversaries. One year later things look quieter now.

KANOUSHEVA: Since 2010 we started organizing the festival every year, before it was done every second year. This raises the concern of whether or not we will have a sufficient number of films and enough good films. This year we have thirteen films in competition and one - out of competition one. Nine films have been made with funding from the NFC, the other four were made with private money. Last year the proportion was 6 to 6. Most of the films will have their national premieres at the festival. Over a third of them are debuts.

FNE: Do you think the festival can help to eliminate the constant frictions in the film community?

KANOUSHEVA: In other countries too, there are producers that are not happy.If these people had jobs, they would not have time to deal with intrigues.

FNE: Which again brings us to the need of an increase of the funding for film.

KANOUSHEVA: My logic is that if more people had jobs there would be less conflicts.

FNE: What do you think about the number of coproductions, last year three, this year only one?

KANOUSHEVA: When the options are limited, then coproductionsare not as numerous as they could be. Until recently, the aid ceiling for minority participation of Bulgaria was 169 000 EUR, now we changed it to 175000 EUR. It certainly does not make us a great player. But we have signed agreements with six countries.

FNE: What satisfied you most during the last two years?

KANOUSHEVA: I think I proved to myself and to the people that I am a moral person. I tried to acthonestly and always according to the rules.