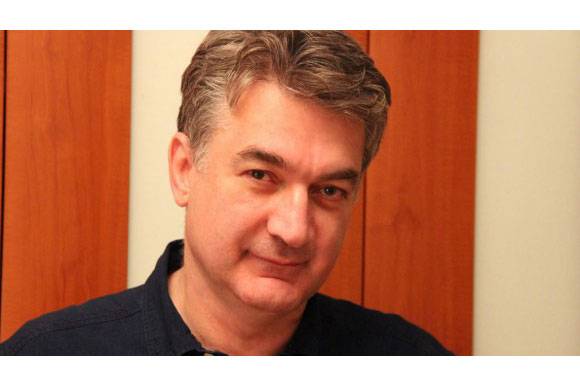 TBILISI: FNE spoke with Gaga Chkheidze, the new director of the Georgian National Film Center, about his goals and the challenges facing Georgian cinema.

FNE: How would you describe Georgian film industry now?

Gaga Chkheidze: Nowadays Georgia is a small film production country. Only a few feature films (maximum 10 films) come out in a year. Of course, the number of productions has increased, but it has grown at the expense of documentary and short films. Television has been significantly engaged in production. Television broadcasters have decided to invest and increase the funding for future projects. Since the theatre and cinema university has limited funds, TV broadcasting has decided to start from there and financially support student films.

In the future, we plan to sign a memorandum with the television. TV broadcasters should be even more involved in the production of Georgian films with its financial capabilities. Cinema theatres have always supported Georgian directors and producers, but we are obliged to help with the distribution of those films across Georgia. It is an accepted form in every country for television broadcasters to support and participate in film production.

As for the industry, we constantly finance productions, which make up for more than 70 percent of our budget. Unfortunately, commercially successful films are rarely made and shown in cinemas and they cannot compete with foreign films in terms of revenue. Genre film is underdeveloped. There is no automatic financing for successful producers and film companies.

The competition regulations are undergoing major changes, in order to get the exact picture of which projects the commission recommends. We will also take care of the development of chosen projects. GNFC will announce more competitions during this year. I am also in favor of the frequent rotation of members of the commission.

FNE: How important is it for you to coproduce with European countries?

Gaga Chkheidze: A significant part of films made in the recent years are international coproductions. Because there is no private money in Georgia and the funds are limited, Georgian producers are forced to travel around the world to seek financing individually. That is why I think that coproduction competitions are vital, but the selection should be based on the quality of the projects and not only on the commercial objectives. Working on a coproduction is obviously a challenge and every country has its own legislation. Building relations between producers from different countries is not an easy challenge, but due to small finances, it becomes a necessity.

FNE: What do you think are the challenges, and how can they be overcome?

Gaga Chkheidze: There are many issues to overcome within the organisation. There are structural problems that have not been addressed in years. Proper distribution of functions and personnel changes are required in order to carry out reforms. It is necessary to distribute Georgian projects to international markets, to organise Georgian film weeks and to promote Georgian artists' attending workshops and training. Supporting the development of the cinema network is vital to the organisation. We have to establish strong relations on the international level.

The next direction is the project aimed at the preservation of film heritage and one department of the film centre will be responsible for the protection of the film rights. The process of returning Georgian films from Moscow is of a paramount importance. We need an enormous amount of money to make a first copy. The possibilities of our National Archives are scarce and therefore there is a need to build a storage facility and to restore the existing building. The demand for restored films has increased throughout the years. We would like to bring movies from Moscow with the right policy over a period of time and to hold retrospectives, conferences, exhibitions, etc.

Restored version of The White Caravan directed by Tamaz Meliava and Eldar Shengelaya was screened at the 2019 Cannes Film Festival. It was displayed to wide audiences and perhaps for many people this film has clarified what was happening behind the closed doors of Soviet Union. We are organising the Georgian film festival in London this year with the same purpose. We also have to make significant changes to the "State Support to National Cinematography" laws. It has been 20 years since its approval. New tendencies and a new attitude should be taken into consideration by the state.

The big studio of J.S.C Georgian Film needs support with the development of film infrastructure, it’s not as productive as it was before; its property has been reduced and its possibilities limited. This studio has a great tradition, an archive, facilities and costumes.

It is also necessary to develop local international film festivals and other film related activities in Georgia..

FNE: What are your main objectives?

Gaga Chkheidze: I want to carry out different projects at the same time. It will be good to merge with neighbouring sectors of arts and to plan projects in this direction. To put together literature, cinema, promoting video art and painting. Since there are no cinema theatres in the regions, it will be good to organise summer tours as well as small festivals. It is necessary that the artists connect with each other. The lack of communication is a part of the problem; we need to have collaborative projects.

FNE: Where do you see the Georgian film industry in five years?

Gaga Chkheidze: In five years we hope to achieve a point of a stable development of the industry, we will have a decent funding system, high-quality films, a cinema portal, analytical journals, etc. The project 'Films in School' will continue. I believe that it is a successful project and many young people are interested in it. Developing critical thinking is an important process for children.

FNE: What do you think about the idea of creating municipal cinemas?

Gaga Chkheidze: There were about 50 cinema theatres in Tbilisi, which were successful for 60-70 years until they were shut down. Most of them were sold as property, converted to markets, stores etc. Some of the historical ones are still intact. I would mention the Apollo cinema, which was opened in 1907 and it is considered as one of the oldest cinemas in the country. The cinema was privatised in 2001 and it has had several owners until the oil company has bought its total shares and now is the sole owner of the venue.

The Rustaveli movie theatre was opened in 1931 and it has been functioning for years, until now, when it lost its function. The cinema is considered a cultural monument and the state protects it, but its future is still uncertain. The idea of building anything on it or to transform it into a hotel is unacceptable. Its restoration is critical, but our wish is not enough without the political support from the state.

We also have restored and reopened the National Archives of Georgia. Even though it is a well-equipped venue, the lack of funds and licenses make it impossible for the administration to hold regular screenings.