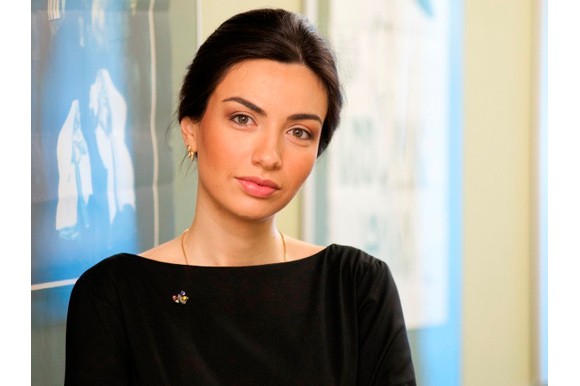 "Georgian film is a strange phenomenon. It is special, philosophically bright, sophisticated and at the same time childishly pure and innocent. There is everything in it that can make me cry and I have to say that it is not easy to make me cry". Federico Fellini

What was the most important development in your country's film industry over the past few years??

One of the most important developments of Georgian film industry in past years is establishment of Georgian National Film Centre (GNFC), the public entity responsible for film policy development in the country.

Since its establishment in 2001 GNFC has supported feature, short, documentary and animated films. It has also represented the country at international film festivals and markets. The Center has issued numerous important publications about cinema and has participated in the financing of projects aimed at the promotion and preservation the cinema in Georgia.

How important are European coproductions for the development of your country’s film industry and what opportunities you see for cooperation with neighboring countries in film production, education and distribution??

Further development of the film sector is a strategic priority of Georgia's cultural policy. We seek to integrate Georgia into the wider European film community, in particular through supporting and nurturing European co-productions with Georgia.

It will also bring benefits to European countries, which are constantly looking for "fresh blood" and new stories. On the one hand, Georgia being located on the crossroads of Europe and Asia, allows for the films to be set with universal appeal, it truly represents uniqueness of two continents in terms of landscape, architecture and culture. Therefore it is cinematically appealing territory for international productions.

On the other hand, Georgia has valuable talent in the new generation and their development prospects are supported by the track record of now internationally recognized artists. To name the few amongst them are Otar Ioseliani, Gela and Temur Babluani, Nino Kirtadze, Dito Tsintsadze, Nana Jorjadze and others.
These and other emerging names of Georgia will certainly have interesting stories to tell internationally.

Due to all this GNFC has now called for applications for funding a European Co-production under the regulations as per European Convention on Cinematographic Co-production - which Georgia has ratified. We have also applied to the Council of Europe's European Cinema Support Fund, Eurimages. If Georgia accesses the Fund, it will strengthen cooperation between its member states and Georgia.

What is the role of film in your country's cultural identity??

Georgian film industry has 100 years of history. Over the century cinema has taken its special place in the heart of Georgian culture. The fact that Georgia with a population of 5 million was ranked 3rd in terms of the number of films produced, many of them internationally recognized, amongst Soviet countries with a total population of 300 million, is one proof of the above.
After the collapse of Soviet Union the Georgian film sector witnessed a stagnation period of 12 years when no films were produced at all. Still, nevertheless from the complex transition from a planned economy to market economy Georgian cinema has been witnessing a period of rebirth and revival. Yet another generation of filmmakers emerged, and the directors who stopped making films in the 1990s returned to the country.
Stories told through images and transmitting cultural authenticity of Georgian life are now appearing internationally. Cultural identity is again translated into films and Unlike Soviet Georgia, independent Georgia has a much better opportunity to make a name for itself internationally.

Country promotion via films is a common phenomenon. Films have a power to travel easily and spread a message of their own. Georgian life transmitted through cinema is certainly one of the strongest means of promoting its origin internationally. Moreover, it facilitates increase of the interest towards Georgia as a destination. It brings indirect benefits for the development of film tourism in Georgia as well as general economic growth of the country.

Films, being ambassadors of their countries, have an immense power of connected to wide audiences. This is why further development of the film sector is a strategic priority of Georgia's cultural policy. We seek to integrate Georgia into the wider European film community, in particular through supporting and nurturing European coproductions with Georgia as mentioned above.

Looking back over the past five years what are the major achievements and what do you consider still needs to be done??

Looking back over the past five years a number of important activities have been realized for the support of Georgian film sector. Regular support of national production is certainly one of the major achievements. Skills development via professional training provided by the Independent Filmmakers’ Association - South Caucasus (IFA-SC) to Georgian filmmakers is the other one. Georgian films like “Street Days” by Levan Koguashvili, “The Other Bank” by Giorgi Ovashvili, “Three Houses” by Zaza Urushadze, “Conflict Zone” by Vano Burduli, “Tbilisi-Tbilisi” by Levan Zakareishvili and others started to travel abroad and speak for themselves. Adequate legal framework has been put in place for nurturing national production and strengthening cultural identity of Georgian films.

Yet, there are number of reforms and activities that need to develop in Georgia. To name the few, the Georgian distribution system has to be developed in order to strengthen the local market and make it internationally appealing too. Georgian infrastructure has to be further developed so that a higher number of productions are hosted and accommodated in Georgia. Georgian films have to have better opportunities for placing coproduction deals, as mentioned above.
A film friendly country, Georgia offers highly competitive prices for filming and minimal regulatory bureaucracy; we do however plan to enhance the Georgian profile with additional financial initiatives, e.g. tax exemption of state subsidies into films and/or introduction of 25% tax rebate on qualifying Georgian expenditures.