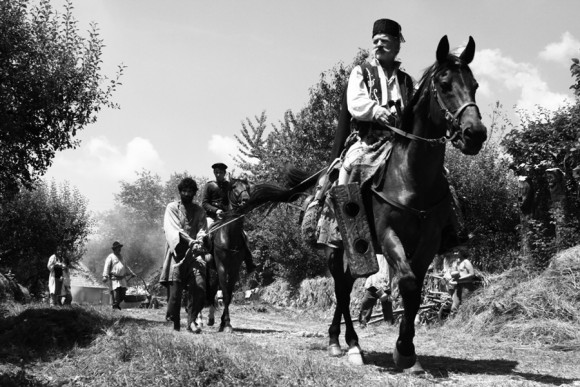 Due to the cut in funding from the National Centre for Cinema, many independent productions have been made in a guerilla system”, according to Tudor Giurgiu, of the production company Libra Film and of the distribution company Transilvania Film.

International coproductions increased and new partners emerged, such as Macedonia, Croatia, Lithuania and the USA. Coproductions with Bulgaria multiplied. Thriller Dogs/Câini, the debut feature of Bogdan Mirică, was shot in 2015 as a production of Romania's 42 Km Film in coproduction with France's EZ Films and Bulgaria's Argo Film. Igor Cobileanski’s second feature Eastern Business, shot in summer 2015, is a coproduction between Romania’s Alien Film and Lithuania's Just a Moment.

The English-language debut of the Romanian-born France-based filmmaker Radu Mihaileanu, The History of Love, moved to Romania in July 2015 after shooting in Montréal and New York. The film is produced by France’s 2.4.7 Films in coproduction with Oï Oï Oï Productions and Romania’s Libra Film.

In February 2015 in Bucharest Jesús del Cerro, who built his career at Mediapro Pictures, established Studio Indie Productions together with Rodrigo Ruiz-Tarazona, the owner and CEO of Cinelab Romania. Indie Productions coproduced with the U.S. company Lunatic Filmsthe independent low budget production Far from Here by James Pillion, which was shot in Romania in 2015.

According to the CNC, ten long documentaries were produced in 2015, compared to five in 2014. The list of documentaries in production in 2015 includes The Sight of Music/ Lo sguardo della musica by Giuseppe Tornatore, a docu-fiction produced by Bobby Păunescu through Mandragora Group in coproduction with Tornatore’s Piano B Produzioni, and Alexandru Belc's Cinema, Mon Amour which is part of the campaign Save the Big Screen.

Castel Film Studios, which mostly services international productions, had a good year. “It was slightly better in terms of profits although the number of projects was more or less the same as in 2014”, Bogdan Moncea, Marketing Manager at Castel Film told FNE. Eight international productions have been shot at Castel Film in 2015, of which the most important is Tommy Wirkola’s thriller SF What Happened to Monday? starring Glenn Close, Willem Dafoe and Noomi Rapace.

Shooting of international productions slowed down in 2015 at MediaPro Studios, which serviced mainly advertisements. The Norwegian feature film A Norwegian Christmas Story / Snekker Andresen og Julenissen (working title) by Terje Ragnes was shot with Seven Film providing services at MediaPro Studios in June 2015. The film produced by Fantefilm Fiksjon was shot 90% in Romania following the good experience established by The Wave / Bølgen produced by the same company with Seven Film at the MediaPro Studios in Romania in 2014. The disaster movie The Wave became Norway’s entry at the Oscars 2016.

In October 2015 it was announced that CME sold MediaPro Studios to a group of prominent American and Romanian investors including Donald Kushner and Bobby Păunescu. The producers’ main objective is to restore the prestige of one of the biggest film complexes in Central and Eastern Europe.

The New Romanian Cinema Association together with the local industry launched Location Guide Romania in March 2015, a project aimed at promoting the country’s various shooting locations and production facilities.

According to a report of PwC Romania published in autumn 2015, the aggregate turnover of the film industry in Romania is approximately 53 m EUR, out of which 82% is generated by foreign productions. The film industry employs 650 to 750 film professionals and the taxes paid to the state budget amount to up to 5 m EUR annually. Revenues of up to 149 m EUR are generated in sectors connected to the film industry. The PwC estimates that the Romanian film industry has a total economic impact of approximately 200 m EUR, creates between 1,600 and 1,800 jobs and pays taxes of up to 22 m EUR to the state budget.

A state aid scheme could increase foreign film production in Romania by up to seven times to approximately 350 m EUR, and the total aggregated economic impact could go up to EUR 1.4 billion EUR, with over 5,600 jobs and taxes of 110-140 m EUR, said PwC Romania. But no state aid is in sight for now and no perspective for a tax incentives scheme.

A total of 183 films including 15 domestic films premiered through November 2015, according to Cinemagia. There were 183 premieres in 2014.

Day-and-date release is in the early stages. After being released theatrically by Transilvania Film on 27 February 2015 with over 53,000 tickets sold, Tudor Giurgiu’s political thriller Why Me?/ De ce eu? was launched for the international audience on VOD on the official website of the film, deceeu.ro. Tudor Giurgiu told FNE that he doesn’t have a VOD strategy for the moment. “With Why Me? we wanted to run an experiment and see if Romanians living abroad will be interested in seeing it,” he said.

Romanian distributors usually release their international films on VOD four to six months after their theatrical release. Antoine Bagnaninchi, who runs Independenta Film says that VOD has become routine for most of his films. “Until recently we launched most of our films on VOD but lately we have been launching all of them on VOD”, Bagnaninchi said.

Independenta Film joined the VOD platform Seenow in mid-April 2015. Seenow is operated by Direct One and is the first Romanian provider of live TV and VOD available on all screens.

CINEPUB, an online and free of charge platform for Romanian films, was launched on YouTube by GAV on 26 February 2015. Cinepub in partnership with Google Romania shows domestic feature films, short films and documentaries.

International sales showed positive results in 2015. Corneliu Porumboiu’s The Treasure / Comoara was sold by Wild Bunch in 24 territories including the US.

Radu Jude's Aferim!, Romania's entry for the Oscar 2016 in the foreign-language category, was also sold by Beta Cinema in the US, UK, Hungary, ex-Yugoslavia, Poland, Taiwan, France, Czech Republic, China and Bulgaria.

The Save the Big Screen campaign, launched by Romanian Film Promotion in partnership with the National Film Center and GAV led to the digitalisation of 35 old Romanian cinemas since 2014, most of them members of RADEF RomaniaFilm, the network inherited from the Communist era.

Four main cinemas in Bucharest- Studio, Cinema Patria, Scala and Cinema Pro - will have to close or change location according to a law prohibiting public activities in buildings with earthquake risk, approved in November 2015.

Cinema City Romania, the number one cinema operator in Romania, opened its first 4DX cinema in Romania in May 2015 and its second 4DX in July 2015. Cinema City runs 20 multiplexes in 14 Romanian towns with 184 screens and 34,004 seats. Two new multiplexes were expected to open by the end of 2015.

In March 2015 the CNC announced that it would allot approximately 2.43 m EUR / 11.88 m RON for the second grants contest of 2014. New projects of Cristian Mungiu, Radu Mihăileanu and Florin Şerban were among the five projects receiving production funding.

From among eight feature films and debut features receiving production grants, six were international coproductions. For the first time, not a single long or short animated project received funding.

In October 2015 the first grant session for 2015 was opened but the results were not announced before the completion of this report.

Vlad Alexandrescu was appointed as the Minister of Culture on 17 November 2015.

Although no tax incentive scheme has been launched by the state yet, local authorities from Cluj announced in February 2015 that they will grant financial incentives to producers shooting in their county. The Transilvania Film Fund (TFF) was launched officially in April 2015 and aims at attracting foreign and Romanian producers and developing local resources and professionals. The initial budget of the fund was 110,000 EUR. In summer 2015 Radu Mihaileanu’s The History of Love, a French / Romanian coproduction, became the first international production to shoot in Cluj.

Following the blocking of its accounts by the National Agency for Fiscal Administration on 20 July 2015, the Council of Administration decided to close TVR News on 1 August 2015.

The Duty / Datoria by Laurenţiu Gabriel Rusescu won the first edition of the script contest for original series The First Episode, launched by HBO Romania in February 2015. The winner received 2,500 USD and the winning script is taken into account for development. A total of 308 scripts have been submitted.

Mădălina Popescu has been named the new Head of Operations at HBO Romania replacing Carmen Harabagiu, Country Manager HBO Romania, who left the company in July 2015.

THE MINISTRY OF CULTURE AND NATIONAL HERITAGE

22, Bulevardul Unirii, sector 3, Bucharest
Press office: +40 212 243 947
www.cultura.ro
This email address is being protected from spambots. You need JavaScript enabled to view it.