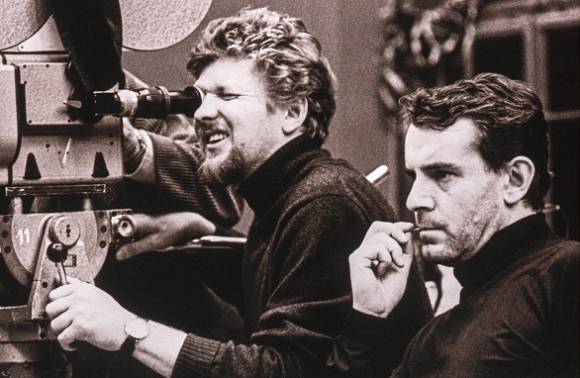 The Czech production company Negativ, whose films have made a mark both at home and internationally for twenty-five years, will present four new feature films at this year's 54th Karlovy Vary International Film Festival. The main competition is represented by the Slovak-Czech co- production 'Let There Be Light' by Marko Škop. Debuting director Michal Hogenauer will present 'A Certain Kind of Silence' in the East of the West competition. Martin Mareček's documentary 'Over The Hills' was selected for the Documentary Competition, and the festival audiences can in addition count down to the portrait film 'Forman vs. Forman' by veteran director Helena Třeštíková and Jakub Hejna, after its premiere at this year's Cannes Film Festival. All titles will be presented as Czech premieres.

“It is a great honor for us to have such a strong presence at this year's festival. The Karlovy Vary festival brings us beautiful memories of the Crystal Globes, which we received here in the main competition for 'The Year of the Devil' and in the documentary competition for 'Mallory', but also for its great festival audiences. I will probably never forget last year's screening of the documentary 'King Skate' in the Grand Hall of the Thermal with all the skateboard legends on stage; or the enthusiastic applause after we screened a special episode of 'Blanik Office' filmed at the very festival that year”, says one of the founders of the Negativ, producer Pavel Strnad.

Negativ was established in Prague in 1995, and the first film under which Pavel Strnad and Petr Oukropec were signed as producers was 'Indian Summer' by Sasha Gedeon. During the following years, the company grew to include Kateřina Černá and Milan Kuchynka, and to date has produced more than 50 features, documentaries and animated feature films. Most of them received a number of awards, either at international festivals or at the national film awards, the Czech Lions. Five Negativ films won the Czech Lion for Best Film: 'The Return of the Idiot', 'Year of the Devil', 'Something Like Happiness', 'Protector' and 'Ice Mother' in 2018. 'Katka' and 'King Skate' in 2019 won Best Documentary. The films 'René' and 'Alois Nebel' succeeded abroad and – as the only Czech productions – brought Negativ two European Film Academy Awards.

The company has continuously cooperated with directors such as Bohdan Sláma, Helena Třeštíková, Marek Najbrt and Michaela Pavlátová, as well as produced many films by debuting directors, such as 'A Certain Kind of Silence' in the East of the West competition. Most Negativ films are produced in international co-production, most often with Germany, France and Slovakia, but also with Latvia and the Netherlands. The long-term partners in the Czech Republic are the Czech Film Fund and Czech Television.

“We strive to select projects that deal with topics that we consider important and that can reach an international audience. We cooperate with our regular authors on the selection of materials and development, which we place great emphasis on. Thorough dramaturgical preparation is a prerequisite for a good result," says producer Petr Oukropec on Negativ's strategy.

Currently Negativ is finishing the feature film 'National Street' by Štěpán Altrichter, based on a novel by Jaroslav Rudiš, which will be premiered this autumn. Work is also underway on the feature-length animated film by Michaela Pavlátová, 'My Sunny Maad', based on a novel by Petra Procházková Frišta. Followers of Helena Třeštíková will be pleased to hear that she together with Negativ is completing more long-term documentaries as well as preparing to shoot another sequel to 'The Marriage Stories'. The biggest Negativ project this year, however, will be the filming of the political drama 'Je suis Karl' by German director Christian Schwochow, which is a German-Czech co-production with Pandora Film Produktion with a budget of over 5 million euros.

-- Let There Be Light Milan (40) has three children and goes to Germany to work and provide for his family. When he returns home for Christmas, he discovers that his eldest son, Adam, is a member of a paramilitary youth group that is accused of bullying and the suicide of a classmate. The father decides to investigate what actually happened. In doing so, together with his wife Zuzka, they discover the true truth about their son, themselves, and about the society around them.

A Certain Kind of Silence Mia goes abroad to work as an au pair in an upper class family. She has to look after a posh house, and especially the ten-year-old Sebastian. The young girl gradually adopts to the special rules of the new family. However, through their systematic manipulation, she begins to turn her back on her own moral standards and the relationship with the entrusted child. Will Mia manage to get out of the grib of a radical family community? Director: Michal Hogenauer Producers: Petr Oukropec, Pavel Strnad Casting / Eliška Křenková, Jacob Jutte, Monic Hendrickx, Roeland Fernhout Screenplay / Jakub Felcman, Michal Hogenauer Director of Photography / Gregg Telussa Editor / Michal Reich Sound / Richard Müller Music / Filip Míšek Costumes / Katrina Liepa Artist / Laura Dišlere

Over The Hills Two thousand eight hundred and fifty-two kilometers between Brno and Divějev, between East and West, between father and son. So far, so close. Vit and his son Grisha set out on a long journey to Russia before the end of the holidays. As soon as he gets in the car, the son puts on his headphones and his father sinks into his memories. But they still can't escape one another. There is however one thing that can bring them together again – a common search. But what are they really looking for? Director: Martin Mareček Producer: Petr Oukropec Screenplay / Marek Šindelka, Martin Mareček, Tomáš Bojar Original Idea / Martin Mareček Director of photography / Jiří Málek Editor / Josef Krajbich Zvuk / Viktor Ekrt

Forman vs. Forman A comprehensive portrait of one of the leading Czech directors Miloš Forman. Forman as a creator, as a man, and as a filmmaker who received Oscars for 'Amadeus' and 'One Flew Over the Cuckoo's Nest'. And at the same time a charismatic adventurer who is not afraid to doubt himself. Inspired by his experiences with the totalitarian regime in the former Czechoslovakia, Forman took the theme of the individual versus the institutions, which he successfully developed in the films he made in Hollywood. At the same time, he was relentlessly looking for a place where he could feel free. 'Forman vs. Forman' by directors Helena Třeštíková and Jakub Hejna summarizes Forman's life journey, which combined joys of fame with wounds of fate. The film is a collage of unseen private and official archive material, as well as autobiographical recollections. It premiered as part of the official program of this year's Cannes Film Festival. Director: Helena Třeštíková and Jakub Hejna Producer: Kateřina Černá Screenplay / Helena Třeštíková Director of Photography / David Cysař Editor / Jakub Hejna Sound / Richard Müller

Screening of Negativ films at the 54th KV IFF.

Let There Be Light

A Certain Kind of Silence

Tweet
More in this category: « Lithuanian films and talents will be seen in Karlovy Vary Festival 12 PROJECTS IN THE FIRST EDITION OF DOC DEVELOPMENT »
back to top