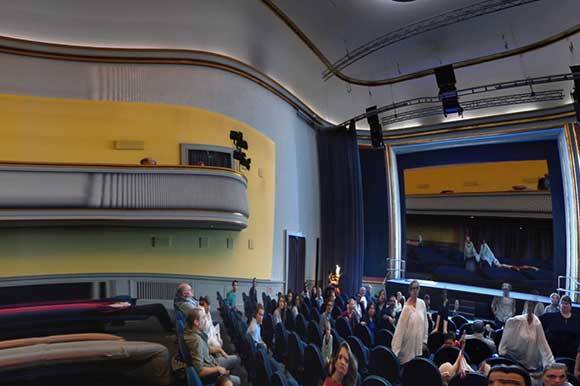 We are happy that two of our works will be shown at Ars Electronica Linz:

The complete program can be seen here.

Back in the 1990s, Martin Reinhart invented a film technique called "tx-transform", which exchanges the time (t) and space axis (x) in a film. Normally, each individual film frame represents the entire space, but only a brief moment of time (1/24 second). In the case of tx-transformed films, however, the opposite is true: each film frame shows the entire time, but only a tiny part of the space – in cuts along the horizontal spatial axis, the left part of the image thus becomes the "before", the right part the "after".
20 years after Martin Reinhart and Virgil Widrich used this film technique for the first time in a short film ("tx-transform", 1998), they again deal with the question of which previously unseen world arises when space and time are interchanged, aptly in a cinema and at full 360°: at the Babylon Kino in Berlin they filmed with the OmniCam-360 about 135 actors and calculated the short film "tx-reverse" from this material.

Tweet
More in this category: « In Latvia This Week: The 23rd BALTIC SEA DOCUMENTARY FILM FORUM ANIMARKT 2019 REVEALS THE CARDS »
back to top