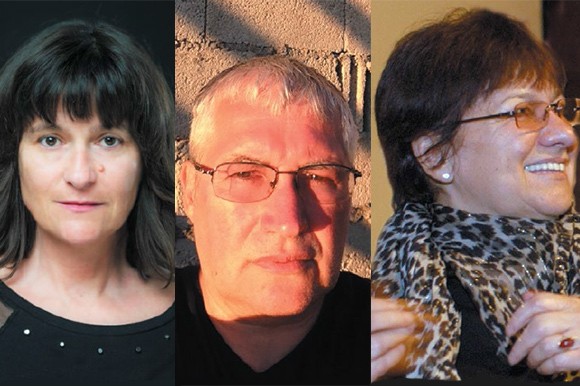 “If you want to tell the truth, honesty is not enough.”

Olga, a successful, workaholic lawyer from Vienna, discovers a family secret so dark that it makes her question her whole life. She begins to search for answers, but her elderly mother, Maria, has done everything she can to hide the truth.

After hearing some tragic news about her past Maria falls into a coma. While she is in hospital, Olga finds a mysterious photo and an old letter among her belongings, so she begins to investigate. All Olga knows is that her mother fled from communist dictatorship in Hungary to Vienna in 1953. Ákos, the love of her life, was with her and was killed by Soviet soldiers after they had crossed the border. But the story does not end there, and Olga’s journey into the past begins.

Olga finds out that Ákos’ murderers raped Maria, who then managed to escape in occupied Vienna. Maria meets Ákos’ cousin Edith, whose vibrant personality and friendship bring back Maria’s love for life. It transpires that both women are pregnant. Edith is expecting a baby by her lover, Anton, a Soviet military officer, but Maria doesn’t know whether Ákos or one of the rapists is the father.  Maria and Edith give birth to baby girls almost on the same day. Maria falls into severe depression; she hates her daughter who has slit eyes and Asian features – the fruit of rape. Soviet soldiers are banned from relationships with local women, so Anton and Edith are arrested and deported by the KGB. Maria is left all alone with the two babies. When the KGB come for Edith and Anton’s little girl, Maria makes the most difficult, fatal decision of her life: she gives her own child to the Soviets, then flees with Olga, Edith’s daughter.

Maria raised Olga as if she were her own child together with an Austrian man in a family where nothing was as it seemed. Olga got everything from her ‘parents’, yet now she finds herself alone; a workaholic, living apart from her husband, and even her son has moved out of home at a young age.

She gets closer and closer to the truth as she pursues her investigation, while painfully confronting her mother. Maria eventually admits the truth, and begs Olga to go to Russia and try to find the daughter she gave away.

With her husband and son, Olga travels to Russia to Murmansk, Anton’s birthplace, the land of the Northern Lights. While searching for her distant Russian family, Olga rediscovers those who are closest to her as well.

Éva Pataki - Screenwriter, playwright, writer of novels, Éva Pataki has been working closely together with director Márta Mészáros for more than 30 years and she has been co-screenwriter of many award-winning features directed by Mészáros. Graduated from Eötvös Loránd University, Budapest in 1977 and later studied journalism and screenwriting, Pataki has worked with several other film and TV directors as well throughout her career, and also ventured successfully into documentary directing. After working for Budapest Filmstúdió and MAFILM, Pataki has been an independent writer in the past 20 years becoming known also as an apt playwright with plays successful internationally. Fluent speaker of English and Russian, Pataki has been publishing successful novels in various genres since 2003. Receiver of the Béla Balázs Prize and the Tolerance Award.

Márta Mészáros - born in 1934 in Budapest. Between 1935 and 1946 she lived in the Soviet Union. Her father, László Mészáros, a sculptor, who emigrated there, fell victim to Stalin’s cleansing. After graduating from the Union State Film School in Moscow in 1956, she made documentary films in the Bucharest Alexandru Sahia Studio until 1958, and then worked for the Hungarian Film Production Company until 1968 as a short-film director. She has been making feature films since 1968. Her Diary-series are autobiographically inspired, the Diary for my Children was banned for two years. Since 1992 she has been managing director of the Nagy Imre Association.

Zoltan Jancso - Born in 1957 in Bucharest. Graduated in 1975 from the Madách Imre High School in Budapest. Between 1975-1977 he was working as an unqualified programmer at the Számítástechnikai & Ügyvitelszervezési Vállalatnál (SZÜV). On the summer of 1980 he left Hungary with his ambition of becoming a photographer and 80 coloured slides. In 1981 he applied and received a political asylum in France. Between 1982-1985 Zoltan attended the Ecole Nationale de la Photographiein in Arles. Between 1987-1990 he was painting, writing, doing experimental filmmaking and photography in Hamburg. While, working as a chef in the Rexrodt, a so-called „nouvelle cuisine” restaurant. In 1990 Zoltan moved back to Hungary with his family.

Since March 2012 Zoltan produce trailers as a freelancer. He is writing mainly poems and novels since he was 16, however he started to write on a daily basis in the last 3 years. At the moment he is working on his first fictional novel.