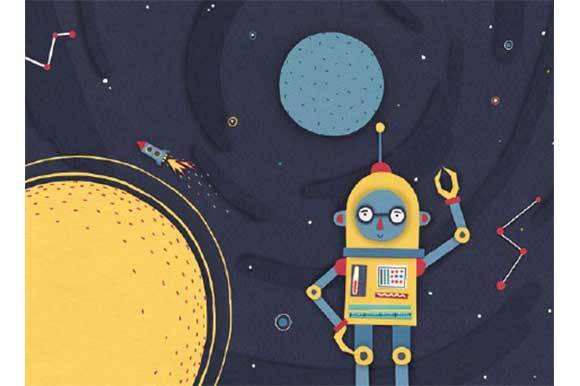 Kosmix directed by Vojtech Dudek and produced by Martin Juza

The director-producer team presented the project at the CEE Animation Forum, running through 8 May 2019 in Trebon, where the animation festival Anifilm takes place through 12 May.

The central character is a small robot, Kosmix, that explores the universe through space travel, and the story is told exclusively by the robot, narrating his adventures to his friends. The 26 episodes of 5 minutes each, aimed at 4 – 8 year olds, is filmed as a 2D animation. The budget is 124,000 EUR and has been financed in 85% by the Czech TV and 15% by Krutart. The series is designed as a complete package with merchandising attached.

“We did it as a very low budget production,” Juza told FNE. “We pitched two projects to the Czech TV and they told us they wanted Kosmix, but we had to have it ready to go in three weeks.”

The broadcasting of the first season begins in January 2020 on Czech TV. Krutart will pitch its second season to the Czech TV in July 2019. The production team have plans to create more seasons, each exploring another aspect of science, and are seeking other production partners for future seasons.