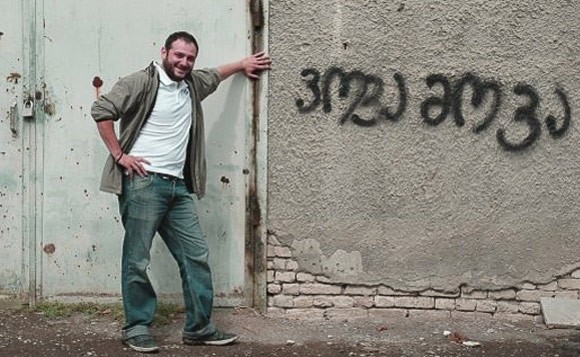 TBILISI: Georgia's European Film Promotion 2012 Producer on the Move Vladimer Katcharava says film production "is adrenalin, it's like being in a war," because "things might change in a minute. You don't have the time for mistakes."

He doesn't have a military background though, but graduated in 2001 in Film Management from the Georgian State University of Theatre and Film (www.tafu.edu.ge).

He completed his studies by attending training programmes organised by AVANTI (www.focal.ch/avanti) and the Independent Filmmakers Association - South Caucasus as well as the East European Film Alliance and EAVE (www.eave.org). He coproduced Georgia Özcan Alper's Autumn awarded with CICAE Award in Locarno (www.pardo.ch) in 2008.

His biggest achievement so far, he say, was serving as Managing Director of Independent Film Project, the biggest production company in Georgia, between 2009 and 2011. He was the company's production manager on Levan Koguashvili's Street Days (selected in the Official Competition at Rotterdam) and executive producer for Aleko Tsabadze's Renee Goes to Hollywood, Rusudan Chkonia's Luxembourg-French-Georgian co-production Keep Smiling, and Rezo Gigineishvili's Russian-Georgian coproduction Love with Accent. He founded his own production company, 20 Steps Productions (www.20steps.ge) in 2011.

Katcharava notes, "I am one of the few producers in Georgia who has worked in the sector since 2003 when it was almost impossible to make a film. Still I managed to deliver all projects and emerged as a strong Georgian producer. Today I can already see the development of the sector on both creative and technical levels, and I am happy to lead the involvement of Georgian producers in the international film scene." He likes that "being a producer doesn't mean to be in charge of technical responsibilities only, but it also involves seeking funding and become a vital part of the creative aspects from the conception of the idea until the film is ready. What is also enjoyable is tracking the drafts of the script and teaming up the proper professionals."

Katcharava is now producing Sandro Katamashvili's animation short Granny, and he is the main producer of the coproduction of the Georgia-UK-Russia-France feature film Epic, directed by Pawel Pawlikowski - and Georgia's first coproduction with the UK. He is in development with the feature 20 Steps Underground by Beso Solomanashvili, set to be finished in 2014.

Katcharava told FNE that he is looking forward in coproducing with France, Germany, UK, and the Netherlands. Since he also focuses on animated films, he is looking forward to finding opportunities for animated coproductions with Canada. "Coproductions are very important for Georgia," he also told FNE. "Coproducing is a way of exploring creative cooperation with other nations, and it enriches the content. Funding in Georgia is still limited and producers with stories which are internationally appealing can benefit a lot from co-financing opportunities in different countries. In this regard, Georgia's accession to Eurimages (www.coe.int/t/dg4/eurimages) is a crucially important step forward." Georgia became a member of Eurimages in 2011 and received funding from Eurimages for Epic.