PRODUCTION: Ukrainian/Lithuanian The Earth is Blue as an Orange in Production Featured 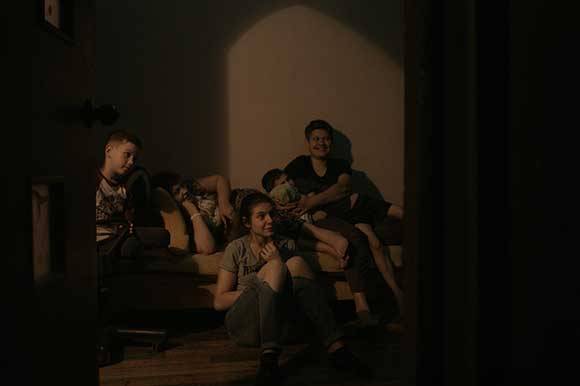 The Earth is Blue as an Orange by Iryna Tsylik

VILNIUS: The creative documentary The Earth is Blue as an Orange by Iryna Tsylik is currently in production. The  film is a coproduction between the Ukrainian company Albatros Communicos and Lithuania‘s Moonmakers. This is the first time a Lithuanian coproduction project has been supported by IDFA Bertha Fund Europe Co-production.

The Earth is Blue as an Orange is a story about a family living in the front-line warzone of Donbas, Ukraine. While the outside world is made of bombings and chaos, single mother Anna and her four children have managed to keep their house as a safe haven, full of life and full of light. Every member of the family has a passion for cinema, driving them to shoot, edit and screen a film inspired by their own life in a time of war.

What power does the magical world of cinema have in a time of disaster? How to picture war through fiction? Isn't art the ultimate way to stay human? For Anna and her children, filmmaking has become a coping strategy to transform their own trauma into a piece of art.

The film has a budget of 215,000 EUR. It received a grant of 45,000 EUR from the Lithuanian Film Centre as a minority coproduction in January 2019 and 85,255 EUR coming from the Ukrainian State Agency, along with funding from IDFA Bertha Fund Classic with a 16,000 EUR grant, and IDFA Bertha Fund Europe coproduction support with a 40,000 EUR grant.

The film is currently in the editing stage. It is being developed within the framework of dok.incubator, a European documentary rough-cut workshop, based on an individual tutoring for the whole creative teams (director, editor and producer). The workshop aims to help documentaries break into the international market and meet a wide audience worldwide.

The film is expected to be completed in the fall, with sound and colour postproduction in September 2019.

Moonmakers (Lithuania)
Giedrė Žickytė
This email address is being protected from spambots. You need JavaScript enabled to view it.