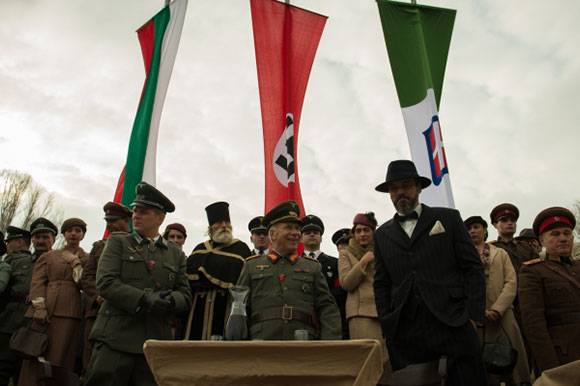 The Liberation of Skopje by Rade and Danilo Šerbedžija

In 2016 Macedonia celebrated 25 years of filmmaking as an independent country. Macedonian film production remained high in 2016 with an annual budget from the Macedonian Film Agency of 6.5 m EUR. Macedonian producers continued to get involved in international coproductions, and most of the films made in 2016 were majority and minority coproductions. A Macedonian-Italian coproduction development fund was launched in 2016.

In 2016 Macedonian Parliament voted to amend the Film Law to harmonise it with the current European practices.

Mimi Gjorgoska Ilievska, the director of the Macedonian Film Agency, was awarded Knight of the Order of Arts and Literature by the French Ministry of Culture and Communications.

Macedonia was in focus with eight feature films at the Febiofest Prague International Film Festival.

Liberation of Skopje / Osloboduvanje na Skopje by Danilo and Rade Serbedzija was selected as Macedonia's candidate for the Foreign Language Academy Award in 2016.

Scenes from Serbian/Bulgarian/Macedonian coproduction Requiem for Mrs J by Bojan Vuletic were shot in Macedonia. The film will premiere in the Panorama section of 2017 Berlin Film Festival.

In June 2016 scenes for the American film Angels Fallen, directed by Ali Zamani and produced by Az Films, were shot on different locations across Skopje. Postproduction services were provided by the Macedonian visual effects and animation company FX3X.

Slovenian/Macedonian coproduction Slovenia, Australia and Tomorrow the World by Marko Nabersnik (produced by Perfo Production, coproduced by Kino Oko and supported by Macedonian Film Agency) went to postproduction in Macedonia in November 2016.

In 2016 Eurimages once again supported Macedonian distributors. Since Macedonia became a member of the Creative Europe MEDIA Programme in 2016, as of 2017 it can use the cinema and distribution support granted by the MEDIA Programme.

The list of the films with most admissions in 2016 includes: Deadpool, Suicide Squad, Batman v Superman: Dawn of Justice, Bridget Jones's Baby and Warcraft.

There is still little interest in domestic achievements and regional films.

There are 11 commercial cinemas and two art house cinemas operating with a regular repertoire in the Republic of Macedonia, and 14 cultural centers screening films occasionally.

The 3D Cinema within the Cultural Center in Bitola had 40,000 visitors in 2016. Together with the admissions during ICFF Manaki Brothers, this number could easily exceed 50,000.

Digitalisation of cinemas was underway in 2016. Since 2012, the Government of the Republic of Macedonia and the Macedonian Film Agency started equipping cultural centers in all bigger cities with high quality digital projectors. Cinemas in those cultural centers are functioning as art house cinemas with programming based on occasional screenings.

There is one call (with two deadlines in March and August) for production support for feature films, documentaries, short films and animated films.

There is a separate call for supporting Film Industry Projects of National Interest, which includes organiSing domestic festivals and other film events of international character, funding expert and professional education of individuals in film industry professions, supporting educational programmes which promote film culture, the membership of the Republic of Macedonia in international film organisations and associations and publications in relation to the film industry.

The MEDIA Programme support for Macedonian filmmakers, festivals and distributors was more than 220,000 EUR in 2016.

A Macedonian–Italian coproduction development fund was launched in 2016 created by the Macedonian Film Agencyand the Italian Ministry of Cultural Heritage Activities and Tourism - Directorate General Cinema (DGC-MiBACT). Four projects received a total support of 60,000 EUR in the first session. The projects are: Stella by Stojan Vujicic, Shame by Ivo Trajkov, Walking Pace by Francesco Falaschi and Stidda Maris by Renato Giuliano. The first two are Macedonian majority coproductions and the second two features are Macedonian minority copproductions.

Macedonian Film Agency supported two minority coproductions by Sisters and Brother Mitevski Production - Cristi Puiu`s Romanian/Bosnian/Macedonian/Croatian/French coproduction Sieranevada, which was selected for the 2016 Cannes Official Competition, and Slovenian/Macedonian/Bosnian coproduction Nightlife by Damjan Kozole, which premiered in the official competition of the 2016 Karlovy Vary International Film Festival. Another film produced by Sisters and Brother Mitevski Production is Macedonian/Belgium/Slovenian coproduction When the Day Had No Name by Teona Mitevska, which will premiere at the Berlin Film Festival 2017 in the Panorama Special section.

In 2016 the Macedonian Parliament voted to amend the Film Law to harmonise it with the current European practices in this area. Changes to the law will contribute to the improvement of this sector in the country by creating the conditions for increased film production and improving the conditions and procedures for implementing the provisions of the Law relating to the right to a refund that is acquired in accordance with this Law.

Starting from 2014 Macedonian Film Agency has been encouraging the investment of funds in film or television projects applying for the right of investment return in the amount of 20% of the gross costs incurred in the country for the realisation of a film or television project, which is not less than 100,000 EUR. Film Incentive programme was introduced as part of the new Film Law in 2014.

Macedonia started using the cash rebate scheme for film and TV projects in 2015. First films that got investment return in the amount of 20% of the gross costs were the French road comedy A Fond by Nicolas Benamou, which spent about 2 m EUR in Macedonia, and Freedom or Die by Vladimir Blazevski.

According to the film law, several sources will add to the budget, such as levies from the TV (0.9% of the annual turnover), cable operators, internet providers and telecoms (1%), distributors (3%) and exhibitors (5%).

The series about the famous Macedonian poet Kosta Racin, The Red Poet directed by Nikolce Popovski and produced by Sektor Film for the Macedonian Radio Television, was shot in November 2016. This series consisted of 10 episodes and received support of approximately 370,000 EUR fromthe Macedonian Film Agency in 2016.

In accordance with the legal obligation for the national televisions to produce, shoot and broadcast a programme with elements of public interest every year, according to the Law on Audio and Audiovisual Media Services adopted in 2014, five TV series premiere on Macedonian television stations in 2016.

On 11 October 2016, mini-series Pain in the Soul by Jani Bojadzi premiered on Kanal 5. TV series A Bag Full of Happiness and Operation Diamond by Nikolce Popovski, both produced by TV Sitel, premiered in November 2016.

Chidren TV series True Stories, written and directed by Kuzman Kuzmanovski, went into postproduction in 2016. The series is a coproduction between Auripigment and the Macedonian Radio Television.

In 2016 the Macedonian Agency for Audio and Audiovisual Media Services published a report with 2015 statistics. All commercial and public broadcasters generated total revenues of approximately 50 m EUR / 3,102,260,000 MKD in 2015, which is a drop of 2.3% compared to 2014. The advertising revenues in the TV broadcasting sector earned 27,466,970 EUR.

Almost all television stations that broadcast via satellite ended 2015 with a loss, according to a market analysis of audio and audiovisual media services for 2015. Only five of the country’s 63 TV broadcasters generated a positive financial result in 2015, mainly from advertisement.

The public broadcaster Macedonian Radio Television, generated 20,881,138 EUR in revenue in 2015, 25.56% coming from advertisements. This is a drop of 3.2% compared to 2014 level. The cable TV operators and regional and local TV stations recorded a serious drop in revenues in 2015, according to the report.